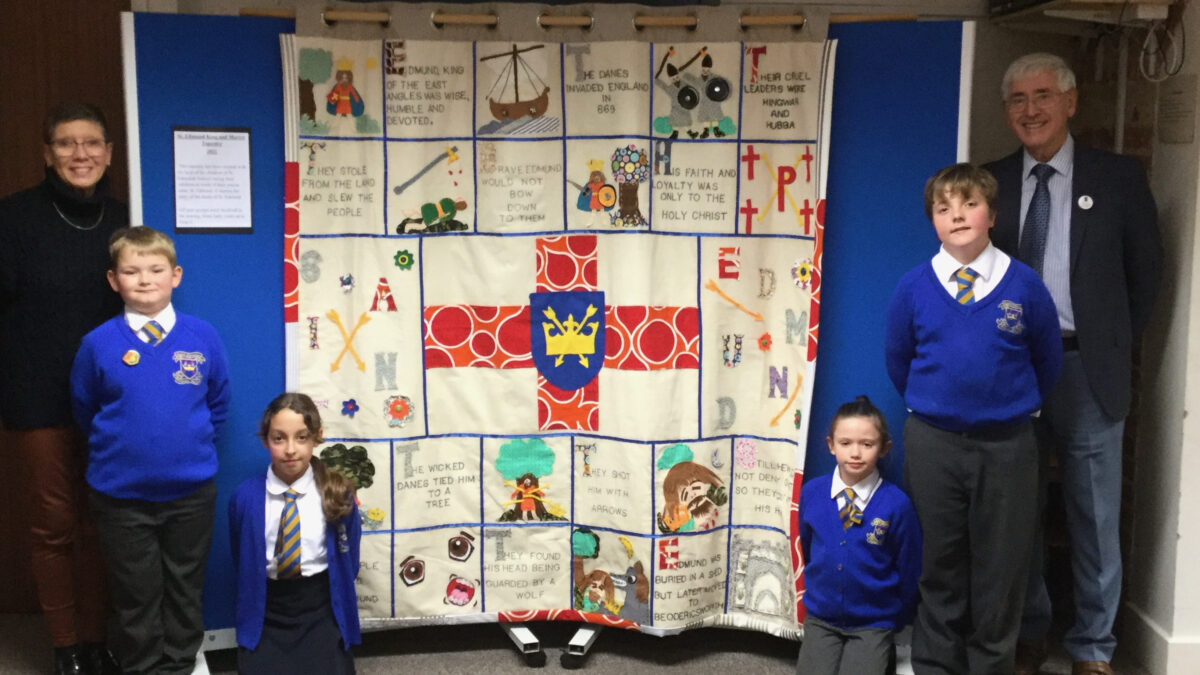 A tapestry depicting the life and death of St Edmund has been produced by pupils at St Edmund’s Catholic School in Bury St Edmunds.

St Edmund’s school has a long and rich history having been founded in 1882. The celebration of St Edmund’s feast day on November 20 was also to provide a special occasion because the Civic Mass in Church that day was to be part of the relaunch of Abbey 1000.

Combining all these threads, retired teacher Jo Pepper came up with the idea of encouraging the school’s pupils to produce a tapestry which would depict the life and death of Edmund. After many hours of pleasurable stitching by children between the ages of four and 11, the tapestry was unveiled at the feast-day lunch in the Church Crypt.

It attracted acclaim from those present including a lady from America who remarked, “What a beautiful piece of art, the children are very talented, and it is a wonderful way of them learning the story of their Saint.”

Headteacher Maria Kemble echoed the praise: “Jo has done a fantastic job in her own time and inspired the pupils to produce something that we can treasure and not only use in our School but elsewhere to illustrate the legend of St Edmund.”

Parish historian John Saunders explained that Abbey 1000 was originally due to take place in 2020 to commemorate 1000 years since the founding of the Abbey of St Edmund but events had to be postponed because of the pandemic.

“There will truly be something for everyone and Abbey 1000 has embraced the monastic identity as well as entertainment in its broadest sense.  Above all, it is about bringing communities and all ages together in a way that will leave a legacy for future generations to build upon,” said John.

Many events will now take place in 2022 including: pilgrimages from Holme and Ely from where the Abbey’s founding Benedictines came; the gathering of Benedictine monks and nuns in May with Dr Rowan Williams as guest speaker; the display of original manuscripts which are being loaned by Pembroke College; musical performances; sculptures in the Abbey crypt; a community day and the finale of a lighting spectacular.

One of the pupils summed up the making of the tapestry: “Everyone should know how important St Edmund was and we have enjoyed telling his story.”

Information about forthcoming events, including the tapestry, can be found at  www.visit-burystedmunds.co.uk/abbey-1000

Pictured above are pupils from St Edmund’s School with the tapestry.