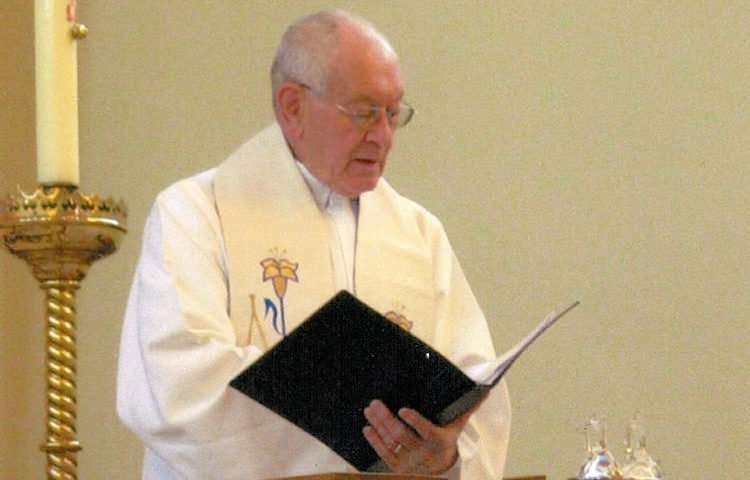 Tributes have been paid to Fr Bill Mason, first ordained as an Anglican Priest, who went on to join the Catholic Church and serve in Bury St Edmunds.

Fr Bill was born William Hugh Owen Mason on July 27, 1928 at Kersey in Suffolk where his mother was the first district nurse to work in that area and his father was a tenant farmer.

He won a scholarship to King Henry VII Grammar school at Sudbury and had the distinction of being Head Boy and Captain of Cricket. He followed his brother into the Indian Army followed by National Service with the experience of guarding Rommel's remaining troops in the Middle East. Oxford University followed and while there, Bill discovered his vocation and went from University to Cuddesdon Theological College.

Bill was ordained as an Anglican Deacon on Trinity Sunday 1954 at St. George's Cathedral Southwark. He was ordained as an Anglican Priest on Trinity Sunday 1955 and served at All Saints, Dulwich, St Barnabas, Northolt Park and St Mary Magdalene, Munster Square as a curate before being given his own parish at St Clement, Notting Dale. After several years there he returned to his native Suffolk and was appointed as Vicar at St Mary's, Little Wratting. He stayed there for a brief period before going to Walsingham as Assistant Administrator of the Anglican Shrine.

Following his marriage to Christine in 1972 he went to the Parish of Ss Peter & Paul at Keddington. There he served as Rector for 15 happy years during which time his children, Lucy, Ben and Joe were born. In 1987, Bill took the courageous decision to be received into Full Communion with the Catholic Church, giving up the Rectory at Keddington and his income as an Anglican clergyman.

Owing to an administrative error, it took five years to gain permission from the Congregation for the Defence of the Faith in Rome for Bill, as a married man, to be ordained as a Catholic priest. In that intervening period, Bill showed a remarkable faithfulness to his priestly vocation, and trust in God’s providence. Whilst maintaining the priestly discipline of the Divine Office he worked as an assistant to a Funeral Director, and immersed himself in parish life in Bury St Edmunds, not the least enriching the choir with his fine singing voice.

On April 3, 1993 he was ordained a priest, and the presence of a crowded church testified to the esteem in which he was held by the Catholic congregation of Bury St Edmunds, his friends and his colleagues from the past. He placed his priesthood unreservedly at the service of any who needed it, whether lay or clerical, and his unsophisticated wisdom and experience quickly won him a wide circle of admirers and friends. His skill in the confessional was legendary. In the last few years when ill-health might have been a valid excuse for scaling down he soldiered on, ably supported by the devoted care of Christine and he died on October 31 at the age of 89.

A major part of his spirituality was his love and veneration for Our Lady of Walsingham, at whose Shrine he was a constant visitor. May she offer her prayers for the soul of one of Her Son’s devoted priests.

May he rest in peace, amen. We offer the prayers and condolences of the Diocese to Christine, Lucy, Ben and Joe and the grandchildren.

Fr Bill's funeral will take place in St Edmund, Bury St Edmunds, with a Requiem Mass at 7.30pm on Thursday November 23, and the Funeral Mass at 11.30am on Friday November 24.