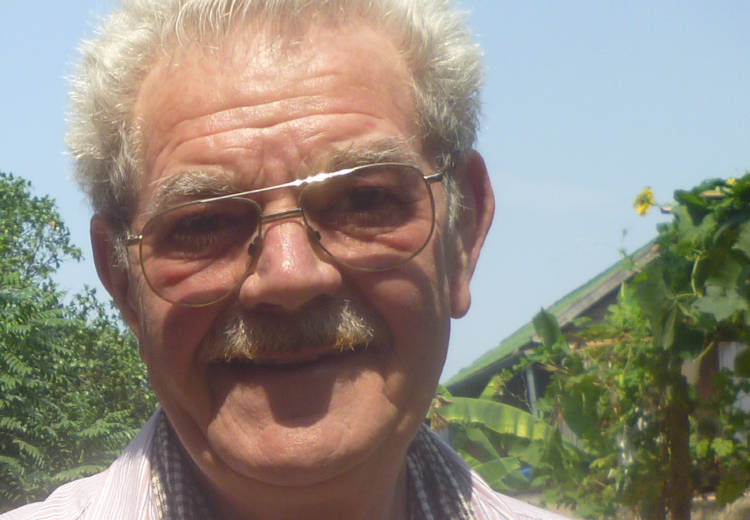 Tributes have been paid to Bob Maidment, the inspirational co-founder and treasurer of charity Support Cambodia, and a parishioner of Sacred Heart based in Aylsham.

Bob, who died unexpectedly from cancer in April aged 73, was committed to helping some of the most disadvantaged communities in the world started with a Diocese of East Anglia trip to Cambodia in 2007. His wife Katie, who is now Chair of Support Cambodia, accompanied him on that trip but “only because I didn’t want to miss out!”.

It was a life-changing decision which finally led to the founding of the independent, non-faith charity in 2015, although raising both awareness and funds had started many years before.

Many events in North Norfolk and beyond have provided clean water and toilets, formula milk and rice soup, community buildings and bicycles, all of which are checked on during annual visits at the Trustees’ own expense.

Bob was born in Tredegar, South Wales, and brought up in Ebbw Vale. He excelled at a range of sports and later turned down an offer to play professional rugby league for Wakefield Trinity in favour of taking up a residential post as a teacher at England’s oldest Catholic public school, St Edmund’s College, Ware in Hertfordshire. Bob taught Maths, English and History, coached rugby and athletics with considerable success and was universally popular, respected as ‘tough but fair’.

It was during this time he met Katie and they were married in 1972.

Fifteen years in the West Country working in special education were followed by a return to St Edmund’s in 1986 to become Head of the [then] Prep School. By then, Bob had been received into the Catholic Church – he always said he never felt any pressure to convert, just inspired by the everyday example of other Catholics. As a convert, his approach to faith was unfussy but deeply held and he was proud of his contribution to the life of Sacred Heart Parish, North Walsham. This included many years leading Journey in Faith and preparation for Confirmation which Bob particularly enjoyed, becoming a very special mentor to so many young people.

Early retirement in 1999 gave Bob time to play golf at Mundesley, make regular visits to France and enjoy the extensive garden he and Katie created in Wickmere. Both the church and Support Cambodia benefited hugely from the sale of Bob’s bedding plants, fruit and vegetables.

A handsome man, he was a familiar figure in Aylsham, with his silver hair and moustache, trademark pipe and lilting Welsh accent. At his burial, mid-lockdown, over 50 local residents spontaneously accompanied his journey to Aylsham Cemetery and then, on a gloriously hot day in August, a ‘Cambodian-style’ Mass of Thanksgiving was celebrated by Fathers David Bagstaff and Mark Hackeson in the garden at Wickmere. People came from all over the country to ‘Remember Bob’, offer incense in his memory and enjoy socially distanced picnics in a wonderful setting. Father Mark’s beautiful homily on ‘Love’ in all its aspects captured the essence of Bob’s life, truly a ‘good man’ who died before his time, remembered for his kindness and patience, his wonderful, gentle smile and readiness to help others.

A Mass in Svay Sisophon Parish, North Walsham’s twin parish in Cambodia, was timed to coincide with the occasion and their Support Cambodia community room has been renamed ‘Bob’s Room’ in memory of ‘Grandpa Bob’. What an honour!

More than £2400 was raised in tribute to Bob, partly for Priscilla Bacon Lodge who cared for him so wonderfully well, but mostly for a new Cambodian project in his memory.

“The scale of the response was both staggering and humbling, illustrating the huge extent to which he was admired, respected and loved by so many people,” said Katie. “It is largely the legacy of Bob’s vision that will ensure the continuation of Support Cambodia”.

For more information about the charity’s work, visit www.supportcambodia.org.uk

Pictured top is Bob Maidment and, below, Katie Maidment with Fr Mack Hackeson and Fr David Bagstaff at Bob’s Mass of Thanksgiving.