Trio of new deacons are ordained at Cathedral in Norwich

Trio of new deacons are ordained at Cathedral in Norwich 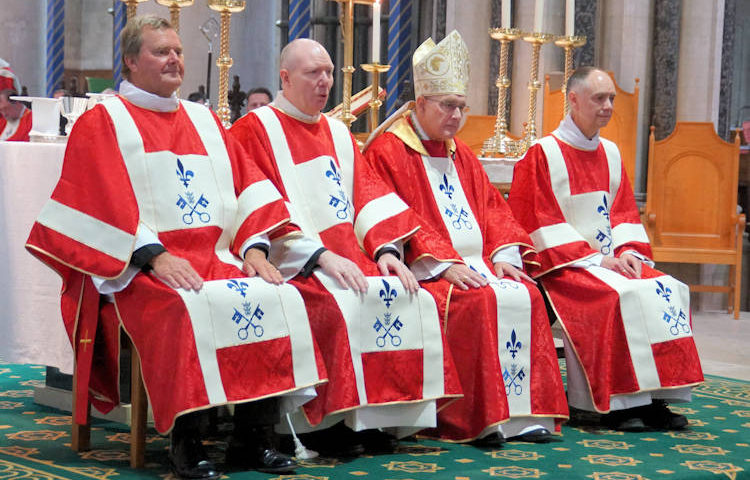 Three men from across East Anglia were ordained to serve as Permanent Deacons during a Mass at St John the Baptist Cathedral in Norwich on Saturday (June 22).

Brett Gladden (from Bury St Edmunds), James Hurst (from Newmarket) and Martin L’Estrange (from King’s Lynn) were ordained in front of around 400 family, friends and clergy from across the Diocese of East Anglia by Bishop Alan Hopes.

In his homily, Bishop Alan said: “You will be consecrated as deacons through the laying on of hands and prayer. This action is the symbol of the calling down of the Holy Spirit to give you new strength – the hand of God himself reaching from eternity into our world and setting you apart for this sacred duty.

“Your loving service must go way beyond what society would call service. You must seek out ways in which you may find him and serve him and especially in the needs of the poor, those in need or who seek justice.

“In these three responsibilities you will be building up the Body of Christ in unity and service.”

For Deacons Brett, James and Martin, ordination was the culmination of long faith journeys and more particularly of four years of study and formation (academic, spiritual, personal and pastoral – the ‘four pillars’) in a programme for men from all the southern dioceses of England.

Most of the formation takes place at St John’s Seminary at Wonersh (Guildford) roughly every third Saturday. They were part of a year group of 17 men from seven dioceses and they have formed very strong bonds and will be attending one another’s ordinations.

All will serve in parishes in which there are already permanent deacons, but each brings his own gifts and each is very open to new challenges.

They join an East Anglian ‘college of deacons’ consisting now of 39 deacons – but with half of them 75 or over, three newcomers with an average age below 60 they will add much needed youthful vigour to the college.

Deacon John Morrill, assistant director for diaconal formation, who teaches on the formation programme and who, along with Deacon John Bell, journeys with the men through their formation at St John’s Seminary, said “Brett, James and Martin bring a huge range of experience of the world with them and a great love of God and of the Church. They are all hugely supported by their wives Celia, Louize and Helen and by their seven children and growing number of grandchildren – indeed within 24 hours of being ordained Martin had the great joy and privilege of baptising a grandchild.

“Perhaps above all, the grace of orders will help them to surrender more completely to God and to let Him gently lead them where He most needs them.”

Ten of the current diocesan deacons have worked extensively in prison chaplaincy, for example, and many more in hospitals and schools, and few had expected or sought these challenges. In the early church, deacons were first and foremost the bishops’ assistants and messengers in all kinds of ways, although with those in need always to the forefront.

After centuries when they were few and far between, permanent deacons are now active in 109 countries and there are now 700 in Britain and 50,000 around the world. Brett, James and Martin are in good company.

You can see a full picture gallery of the ordinations here and below. Pictures by Keith Morris. 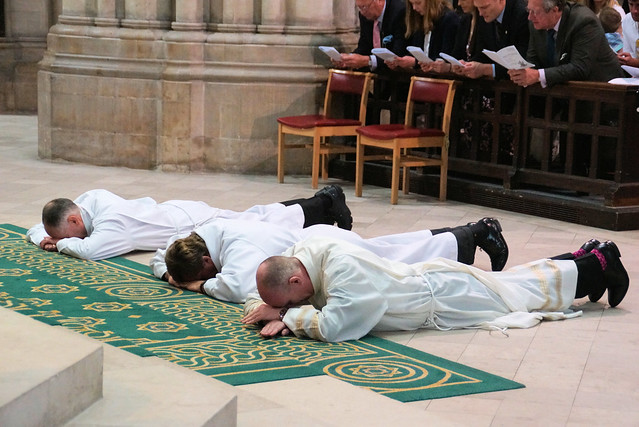