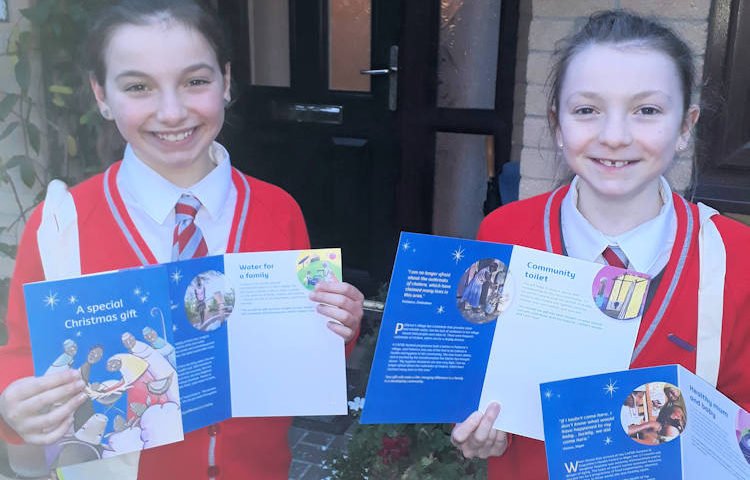 Two 11-year-oldPeterboroughtwins have asked friends and family for donations instead of birthday presents to ensure families living in poverty receive life changing gifts this Christmas.

Catholic sisters Grace and Elizabeth Burrows wanted to celebrate their eleventhbirthday in style so they held a cinema party and invited their whole class. But, instead of asking for gifts, the pair asked for donations to buy charity gifts, including 28 meals for people living in poverty ' one for each member of their class.

Grace said: "At first, our friends were really surprised that we didn't want presents but then they thought we were doing the right thing. It has even inspired them to do the same and fundraise."

Elizabeth added: "It makes us happy to know we can improve someone's life. Learning about the gifts and other communities has inspired me to be a teacher when I am older so that I can help others and teach them about the things I have learned."

Research suggests that this Christmas, households will spend on average £473.83 on presents, with top children's gifts retailing for around £90 each.

At their party, the girls managed to raise the equivalent – £180 – which they used to buy virtual charity gifts including a community toilet and a family water pump, meaning that women and children will no longer have to walk for hours to fetch water.

Elizabeth added: "I liked "the net that protects' for mosquitos. I know a lot about mosquitos and how dangerous they can be. I recently went to an open day where we learned all about the diseases mosquitoes can carry and that's why I think it is so important."

The charity World Gifts that were purchased by the girls are supplied by the international development charity CAFOD. In the decade since the charity began selling the alternative range of Christmas gifts, they have helped to transform lives and communities by providing 104,000 school starter kits, 57,000 goats and 40,000 chickens. Gifts range from £5 for emergency water to £27 for the gift of play and £54 to build a greenhouse.

Last year alone, the "teach someone to read' gift meant over 4,000 children were able to attend literacy classes, opening the door for education, work and a brighter future.

The twins' mother, Angela Burrows, said: "It was a simple idea really. People spend an awful lot of money on gifts for birthdays and this is a great opportunity to help others who are less fortunate.

"The girls had a lovely party, and were delighted with the response from their friends, meaning they could make a difference to so many people’s lives."

Find out more at: www.cafod.org.uk/worldgifts

Pictured top aresisters Grace and Elizabeth Burrows and, above, children in Kenya enjoying a nutritious meal as part of CAFOD's World Gift's scheme.