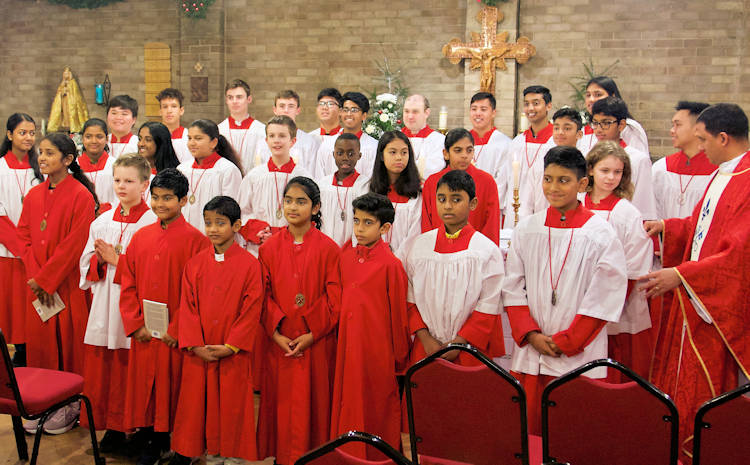 Silver medals have been awarded to five young altar servers at St Philip Howard parish in Cambridge in recognition of a combined total of 50 years of service. Deacon John Bell reports. 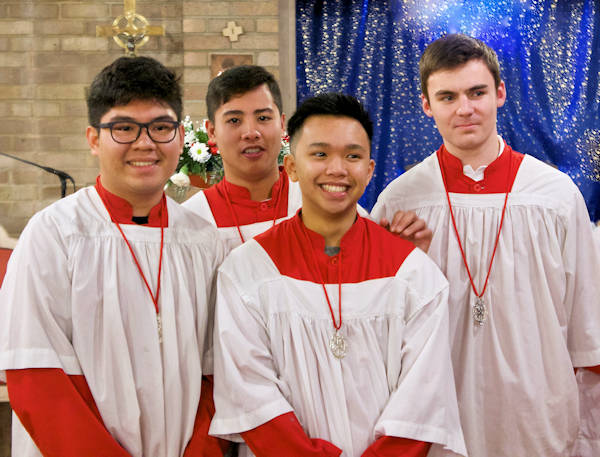 Jerald Birad said: “I am an altar server to serve the Lord Jesus Christ, to help the community of St Philip Howard Church and be in the company of family and friends.”

St Philip Howard has long had a large body of servers. Senior server, Oliver Marks, first started serving over 20 years ago. He now is responsible with Zac Desruisseaux for the organisation and training of 60 servers.

He said: “For over 30 years St Philip Howard Parish has had a strong community of altar servers. Over the years, many servers have been awarded their silver medals, accounting for hundreds of years of service at the altar of God.

“As part of the strong servers’ community, Patrick Hawkins was one of the altar servers who served with me, and discovered his calling to the priesthood when he reached maturity. Several of the altar servers who had known Patrick for many years were present to serve at his ordination as Fr Padraig Hawkins. Since the advent of girls being permitted to serve, the numbers have increased even more. It has been a pride and a privilege to witness and be part of this in the parish.”

As well as the award of silver medals, the parish celebrated the enrolment of nine new servers and the award of six bronze medals. Apart from the serious business of serving in church, the servers also enjoy social activities together. During the Christmas holidays, a large number of them went ice skating at the new Cambridge Ice Arena. Despite bumps and falls, no one suffered any serious harm.

Pictured top are many of the 60 altar servers at St Philip Howard parish in Cambridge.