Why not issue an invitation to remember? 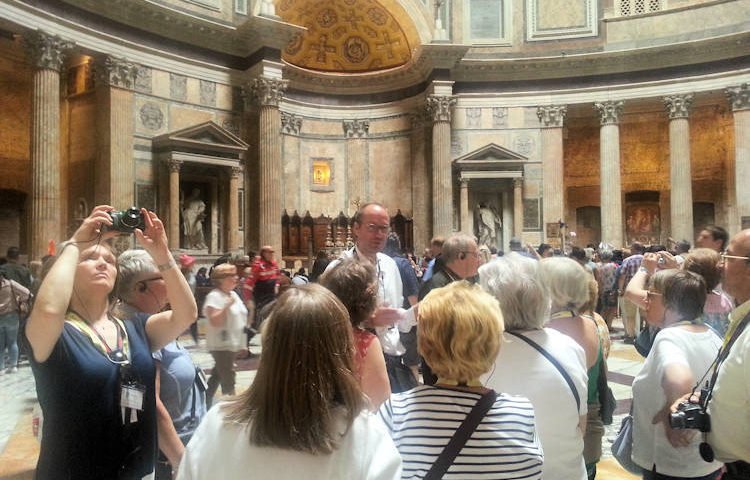 Do you ever get the feeling that you are about to experience something wonderful? The March and Chatteris parish pilgrimage to Rome was such an occasion reports Laurence Richardson.

The pilgrimage experience is both shared and personal; it is a journey of discovery, not only of a foreign land, but of the self and of one’s companions; it feeds the soul and may gently take you closer to God.

Fifteen intrepid souls from March and Chatteris met up outside the church of Our Lady of Good Counsel & St Peter, March, early on October 1. It was also the very first time we would meet our soon-to-be parish priest, Fr Michael Ryan, who had bravely offered to lead the pilgrimage in advance of taking up his new appointment in the parish of March and Chatteris, due to start in mid-November.

Once at Stansted Airport, our itinerary created by Pilgrimage People began. Pilgrimage People is a charity that traces its roots to a pilgrimage in 2000 to the Holy Land organized by Fr Paul Maddison, until recently our own parish priest. From everyone, a big thank you to Father Paul for creating such a great pilgrimage for us.

Our friendly and spotlessly clean guest house in Rome was run by the Congregation of the Institute Madri Pie and only five minutes’ walk away from the Vatican. Dinner was across the road each night at La Vittoria, a traditional Italian restaurant.

There is not enough space to describe in detail all the wonders we saw in Rome and the Vatican City. A real highlight for me was attending the open-air mass celebrated by Pope Francis in St Peter’s Square. The original plan was to attend a papal audience but, on this particular day, the general audience was replaced by the Papal Mass for the opening of the Synod of Bishops, focused this year on The Young, The Faith and Vocational Discernment.

Fr Michael got us in the queue early and we found ourselves seated in a forward section. We were treated to an awesome spectacle – you couldn’t move for cardinals and bishops in their red and purple attire. After mass, Pope Francis passed around the perimeter of the crowd in his popemobile.

Richard, our official guide, gave us very informative and good-humoured tours of St Peter’s Basilica (spot the Michelangelo and Bernini), St John Lateran (the cathedral of Rome), the Catacombs of San Callisto (where we celebrated Mass below ground much like the early Christians), the Basilica of St Clement (built over early churches dating back to the 4th century), the Basilica of St Maria Maggiore (Our Lady of the Snows) and the Pantheon.  Our itinerary also included the Coliseum, the Trevi Fountain and the Piazza Navona for good measure.

On our last morning, we visited the Basilica of St Paul Outside the Walls and the Pontifical Beda College where we received an unforgettable welcome from the Rector, Fr Philip, and his students, several of whom hail from East Anglia. We celebrated Mass together in the Beda’s chapel.

A resounding thank you to Fr Michael for stepping into the breach and leading us magnificently. The feeling of unity and love that grew in the group was really special.

Pictured above are the March and Chatteris group inside the Pantheon in Rome. Although a former Roman temple, completed by the emperor Hadrian, it is now a church dedicated to St Mary and the Martyrs.