Chloe is honoured for 30 years of service to toddlers 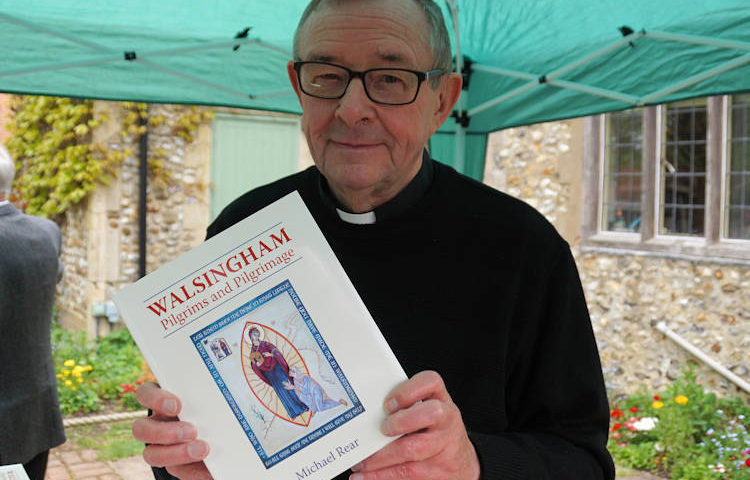 An updated version of the standard historical work on pilgrims and pilgrimage to Walsingham, including new research on the possible discovery of the original Our Lady of Walsingham statue, has been published written by Diocese of East Anglia priest Fr Michael Rear.

That Our Lady should, for her first Shrine in Europe, have chosen a remote village in the then Diocese of Thetford,  later of Norwich,  and now in the Catholic Diocese of East Anglia, is – for those of us who are members of this corner of the Body of Christ – a wonderful privilege and blessing.  Indeed the mere fact that she should have chosen our Island, once known as Our Lady’s Dowry, is miracle enough.

So a deep, thorough, complete, well-written and well-presented history and overview was not premature when Fr Michael Rear wrote Walsingham: Pilgrims and Pilgrimage in 2011. A second edition of what Cardinal Vincent Nichols called ‘his splendid book’ has now been published.

Our own Bishop Alan and the Bishop of Norwich have jointly written the Preface, commending it as the ‘standard work on pilgrims and pilgrimage to Walsingham, acclaimed by Catholics, Anglicans and the general reader’, especially in the light of the Ecumenical Covenant which the Catholic and Anglican Shrines made in 2018.

Not many people know that Walsingham’s story began in Roman times with pilgrims coming to its Shrine of Mercury. Fr Michael records this early history, before relating how the Shrine to Our Lady was founded in the eleventh century (carefully presenting new arguments for the disputed date of 1061) and why and how it grew to be the most famous Shrine of Our Lady in Europe. The book records the dreadful events in the reign of Henry VIII, including the Walsingham Conspiracy, which resulted in the deaths of 12 local men who tried to save the Walsingham Priory from destruction.

The recovery of devotion and pilgrimage to Our Lady of Walsingham by Anglicans and Catholics is recorded in detailed accounts of the restoration of both Shrines; as well as the spiritual meaning of the place, and the purpose and value of pilgrimages to Our Lady in the modern world, especially for the New Evangelisation. This second edition brings the story up-to-date, with the developments in both Shrines since 2011.

While researching this second edition Fr Michael discovered that an early 13th century English oak Crowned Virgin Statue of Our Lady, looking very like Our Lady of Walsingham, had been found hidden in an old house near Walsingham, the only wooden statue of this type known to have survived the iconoclasm of Henry VIII. In 1925 it was sold to the Victoria and Albert Museum where it is known as the ‘Langham Madonna’. Fr Michael has explored its provenance and his research is included in this new edition: his conclusion is that the old statue may indeed be the original and venerated image of Our Lady that was supposed to have been burnt at Chelsea.

The book will certainly, and for many years, be standard reading for anyone with a devotion to,  love for and interest in Our Lady’s Shrine in this remote but beautiful corner of Norfolk. It is surely pertinent that Walsingham: Pilgrims and Pilgrimage should have been published in the year before England is renewed as Her Dowry.  May She continue to hold England constantly in prayer to Her Son!

Pictured above is Fr Michael Rear with his book at Walsingham.