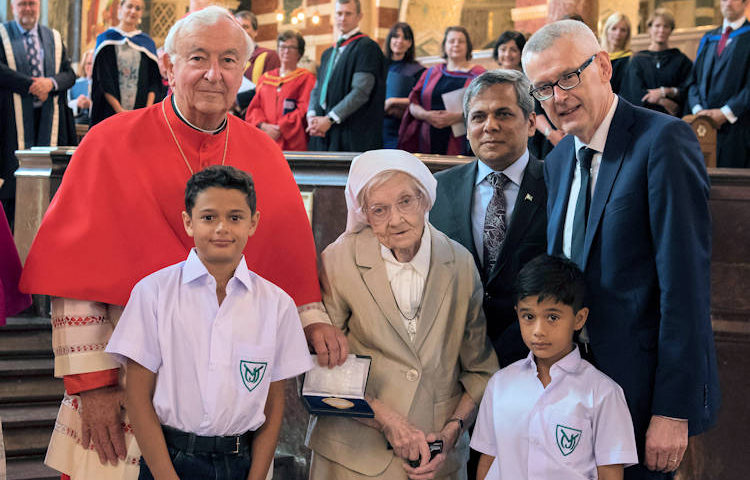 Suffolk nun, Sr Berchmans Conway, has been awarded the prestigious Benedict Medal by St Mary’s University, London in recognition of a lifetime of teaching and promoting interfaith relations in Pakistan at a ceremony in Westminster Cathedral.

The medal, which is the University’s highest honour, was presented to Sr Berchmans by the Archbishop of Westminster and Chancellor of St Mary’s University, Cardinal Vincent Nichols, during a St Mary’s Summer Graduation Ceremony on July 16.

Sr Berchmans was born in County Clare, Ireland, in 1930 and joined the Convent of Jesus and Mary in 1951 in Willesden, London. She now lives in the order’s convent in Felixstowe.

The award is in recognition of almost 70 years of teaching, most of which was spent in Pakistan, where she taught Muslim, Christian, Parsi and Hindu children at the Convents of Jesus and Mary in Lahore, Murree and Karachi.

In 2012, whilst she was Principal of the Convent of Jesus and Mary in Karachi, Sr Berchmans was awarded the Sitara-i-Quaid-i-Azam, one of the highest civil awards given by the President of the Islamic Republic of Pakistan. The award citation celebrated her “constant adherence to the call of duty over a span of 59 years, which has made Sister Berchmans a living example to emulate.”

During her teaching career, Sr Berchmans taught and inspired thousands of students, amongst whom are the late Prime Minister of the Islamic Republic of Pakistan, Benazir Bhutto, and renowned MIT Astrophysicist Nergis Mavalvala who made significant contributions to research which resulted in the first observation of gravitational waves and which was awarded the 2017 Nobel Prize for Physics.

Sr Berchmans is the fifth recipient, and the first woman, to be presented with the Benedict Medal, joining previous recipients Bartholomew I, the Ecumenical Patriarch and Archbishop of Constantinople, Dr Richard Clarke, Archbishop of Armagh and Primate of all-Ireland, Former Archbishop of Canterbury Baron Williams of Oystermouth, and Sir Michael Wilshaw, the former Chief Executive of Ofsted and alumnus of St Mary’s.

Speaking of the award, Cardinal Vincent Nichols, said: “Sr Berchmans’ dedication and commitment to the thousands of students she has taught is an inspiration to anyone committed to the vocation of teaching. Her examples of inclusivity and respect will guide our graduates as they embark on their own teaching journeys and continue to inspire future generations.”

President of Ireland, Michael D. Higgins, sent his congratulations, noting: “Through her words and actions, Sr Berchmans has not only inspired her students but also encouraged those she met to make positive and lasting contributions to society. Through her work and her dedication to teaching she has become a powerful illustration of the beauty and potential of teaching, and she has been an outstanding example of the power of inclusivity and inter-personal empowerment. May I congratulate her on her award and thank her for work, and for the legacy she has created”

Irish Ambassador to the United Kingdom HE Adrian O’Neill said: “The Irish Government is acutely conscious of the record of service and achievement overseas of many Irish citizens across our diaspora. Sr Berchmans is an outstanding exemplar of such service; her generous, sustained and distinguished contribution to education and mutual understanding has made a lasting impact, over several generations, in Pakistan. She is a very worthy recipient of the Benedict Medal, of whom her fellow Irish citizens are very proud.”

Former student of Sr Berchmans and MIT Astrophysicist Nergis Mavalvala said: “My warmest congratulations to Sr Berchmans on being honoured for her lifelong devotion to one of the most important of human traditions – educating the next generation.”

Baroness Warsi, former Senior British Foreign Minister and a visiting professor at St Mary’s University, said: “Sr Berchmans has given her whole hearted commitment to teaching. She has inspired generations of students, who have gone on to make significant contributions to society across a wide range of sectors.

“I had the privilege of visiting Sr Berchmans in Karachi and I saw at first-hand how her work and presence has created a lifetime of inter-faith understanding.”

Sr Helen Mary Haigh RJM, provincial superior of the Sisters of Jesus and Mary, said: “We are all delighted that Sr Berchmans has received this award.”

Pictured above: (left to right) Cardinal Vincent Nichols, Sr Berchmans, HE High-Commissioner Muhammad Nafees Zakaria, and HE Ambassador Adrian O’Neill, joined by two former pupils of Sr Berchmans at the presentation of the Benedict Medal in Westminster Cathedral.