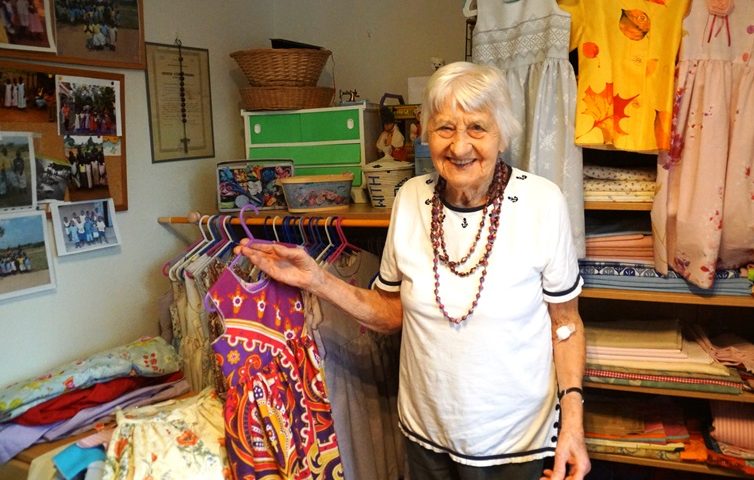 A 95-year-old great-grandmother from Wymondham is making hundreds of dresses for poor girls in Africa and Asia. Eldred Willey reports.

She works each day in her ‘factory’ – the front room of her bungalow – where the walls are covered with photos of children wearing her beautiful products.

“God has given me a gift,” said Anna Bayles, “and I could not live without it.”

Anna asks friends and fellow parishioners for second-hand pillow cases, curtains and tablecloths, which she turns into colourful, bright dresses. Nothing is wasted.

“I do every stitch with lots of love, and lots of emotion,” she said. “When the clothes go, I am so pleased, but I have to ask: why are the children without clothes in the first place?”

Anna began her childhood just north of Paris, the 16th of 18 children. When their home was bombed during the Second World War, the family evacuated to rural Picardy in Vichy France.

There was nothing to buy in the shops at the time, and people were making their own clothes. A nun called Sister Blandine taught Anna dressmaking. “Faith was very important to our family,” she recalls. 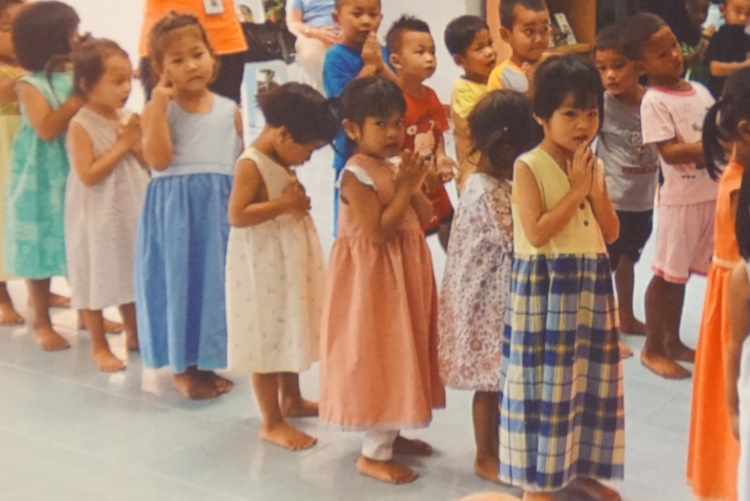 At the end of the war she married a British soldier, Jack Bayles, and they moved to Wymondham. He became a Catholic and they settled in the parish. They adopted four children, including two, Monique and Jean-Pierre, who came from Africa.

One day the founders of an Attleborough-based charity, the Uganda Support Fund, showed a film in the parish, and Anna asked them if they could use some dresses. The came round to her bungalow the next day, and the factory was born.

Anna has now made hundreds of dresses for children in Uganda, Zambia and Kenya, Thailand, Jordan, Vietnam and more. Often she will send them out with missionary priests who are living in Norfolk.

“They call me Mother Anna in Thailand,” she said. “In Africa I am simply the Dress Lady.”

So how many has she made altogether?

Anna goes to Mass during the week when she can, and to the Exposition of the Blessed Sacrament on a Tuesday.

“As soon as I come home from church I get onto it,” she added. “Seven days a week. I can make a dress in 45 minutes and a skirt in 20. But I don’t force myself; it just comes naturally. I finish about 4pm. I belong to a couple of clubs, but I don’t have time to go.”

“I need my faith so much,” she concluded, “and I love my church.”