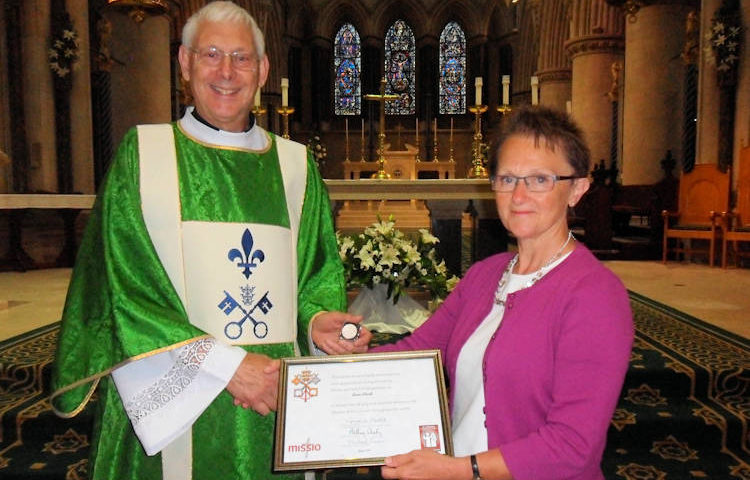 A Norwich St John’s Cathedral parishioner has been honoured for 25 years’ service to Catholic overseas mission Missio with a medal and certificate.

Anne Clark has been a Local Secretary for APF-Mill Hill, which is part of Missio, for 25 years. Since volunteering for the role back in 1993. Missio is Pope Francis Official Charity for overseas mission and is part of the world wide Pontifical Missionary Societies.

In 1993, there were around 100 Red Box holders, but Fr Frank McCarthy a Mill Hill missionary conducting the appeal, took pity on Anne as she was the only person to volunteer to empty the boxes and suggested that she used envelopes to collect in the money. This idea has since been successfully rolled out to other dioceses around the country.

Over the years volunteers to help Anne have dwindled in number but an appeal earlier this year resulted in over 65 Red Boxes being distributed and with many new annual members.

Anne’s father Dick Clark, had been the APF-Mill Hill secretary at St Mary’s Ipswich, for over 25 years and she says that she had no idea why she wasn’t daunted by counting all that copper, when helping her father.

Diocesan director for Mission, Deacon Chris Brighten, said: “Anne has worked tirelessly over 25 years to raise money for our brothers and sisters in the developing world, for missionary to spread the Good News of the Gospel, to communities mostly in Africa, Asia and South America. These Catholic communities are too young, too small or too poor to support themselves, and certainly need our help. Some risk their lives to remain faithful to the Gospel of Christ.

Anne says of her work: “So here I am still collecting and counting – but what a small task in support of those people who have the courage to put their faith into action.”

If you want to find out more of the work of Missio, or would like a Red Box, please contact Anne Clark at the Cathedral or Deacon Chris Brighten, The Diocesan Director for Missio in East Anglia, at chris.brighten@st-mary.org.uk

Pictured above, Deacon Chris Brighten presents Anne Clark with a medal and certificate, for 25 years service to the APF-Mill Hill Missions, at the Cathedral in Norwich.