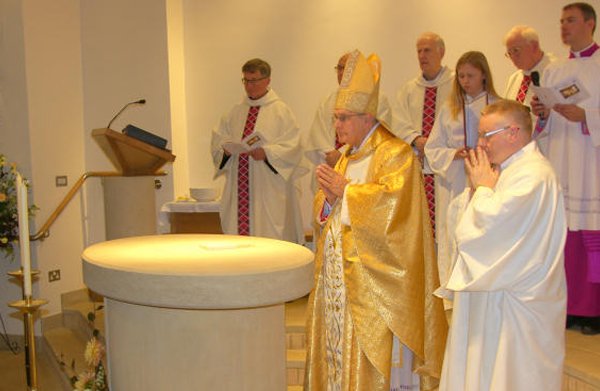 A new church which blends centuries of history with 21st century architectural excellence has been consecrated by the Bishop of East Anglia at Clare in Suffolk after a 19-year project.

A 200-seat extension to the original smaller 13th century Church of Mother of Good Counsel at Clare Priory was consecrated in a service last night (October 6) led by the Bishop of East Anglia, the Rt Rev Alan Hopes, before a 200-strong congregation of church and civic dignitaries, corporate donors, parishioners, those involved in the work and representatives of other local churches.

The building, which cost around £1.2m, has already won the “Building Conservation” category in the Eastern Royal Institution of Chartered Surveyors 2015 Awards, been declared Project of the Year and is going forward for a possible national award.

Leading the consecration Mass, Bishop Alan, said: “This is a significant celebration in the life of the people of God here in Clare. 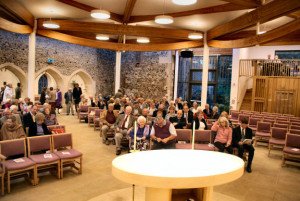 “We have many people to thank including former parish priest, Fr Bernard Rolls, who was so closely involved in the planning and beginning of the project and current priest, Fr David Middleton, who has brought the operation to its fulfilment.

“The new building has grown out of the ancient stones over the past few years and your worship here will enable the mission of the church to grow further and flourish.”

There were a number of symbolic ceremonies as part of the two-hour celebration Mass.

Relics from a number of saints of significance to the parish, including St Augustine of Hippo and his mother St Monica, were placed in a hollow that had been carved in the altar and then sealed in by a craftsman during the consecration.

The altar was anointed with oil, as a symbol of Christ, by Bishop Alan, and the church itself was anointed to signify that it is given entirely to Christian worship.

Incense was burned in a brazier with lighted charcoal on the centre of the altar, to signify Christ’s sacrifice and prayers rising up from worshippers to God and its dedication as a house of prayer. 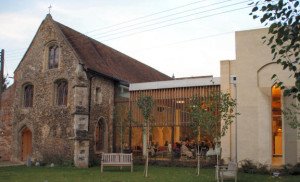 Finally, the altar was covered with a new altar-cloth as it is the Lord’s table for the feast where God’s people are refreshed with the body and blood of Jesus. Candles were lit on the altar and around the church as a reminder that Christ is a light to the nations.

At the end of the service, parish priest, Fr David Middleton, said: “Since the church was completed in July 2013, visitors have been full of praise for the church. ‘Stunning, breathtaking, worthy,’ ‘a glorious combination of new and old’, ‘a sensitive choice of materials’. At the Consecration Mass we experienced for ourselves all that has been achieved in providing a dignified, spacious, beautiful place for prayerful worship.”

Planning permission was first sought in 1996 when more space was needed for services in the church and at Clare Priory than the original 90-capacity church could accommodate. This need has increased over the intervening 19 years when it was often standing room only at Sunday Mass and special services. 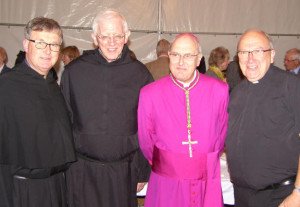 Work was completed in summer 2013 on the freestanding contemporary extension, built alongside and linked to the existing church, which occupies the 13th century former infirmary to the original priory founded in 1248.

The new building has been designed to avoid interfering with the fabric of the existing church and the archaeology of this special, historic site and to be in keeping with the peace and beauty of the setting.

Clare Priory and its church are important monuments both in terms of the historic building stock of England and as the Mother House of the Augustinian Friars in the UK Province and in the entire English-speaking world.

You can find out more about the project at: www.clarepriory.org.uk 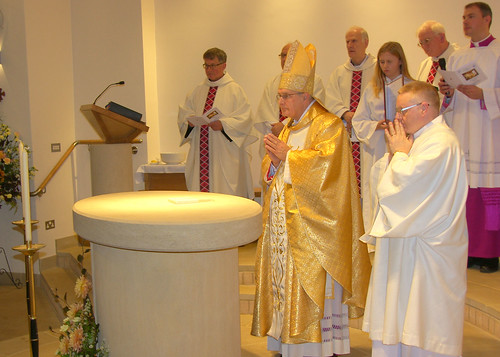