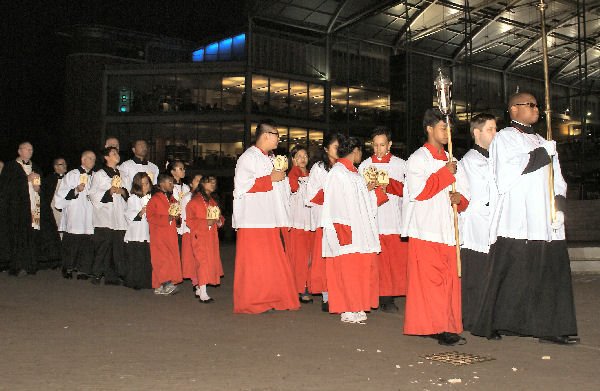 Around 700 Roman Catholics walked in a silent procession of witness through the streets of Norwich, from the Castle Mound to St John the Baptist Cathedralon Fridayevening to mark the next stage of commitment to the New Evangelisation.

The procession followed a midday Children's Mass at St John's Cathedral attended by around 1000 school children and school staff.

The Ignite procession was to celebrate the end of one year of New Evangelisation, inspired by Pope Francis who asked catholics throughout the world to commit to a personal renewal rooted in prayer.

A second year is now beginning which will focus on evangelisation of parishes in Norfolk, Suffolk, Cambridgeshire and Peterborough.

The procession was led by Bishop of East Anglia, the Rt Rev Alan Hopes who said: “This very public display of our Catholic faith began with prayers at the Castle Mound in the centre of the city. 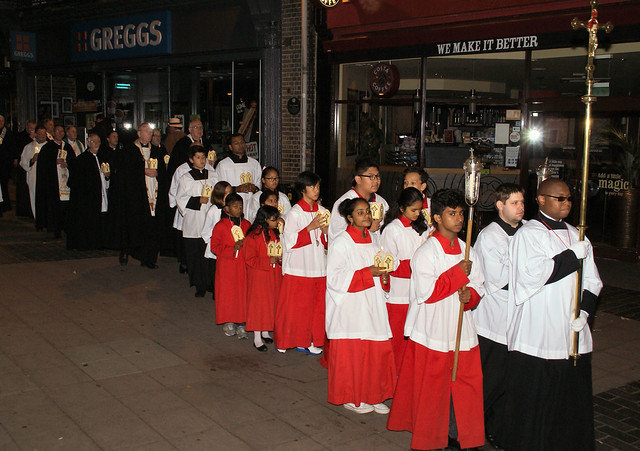 Pictured above the procession passes in front of The Forum in Norwich city centre.

"We've chosen to walk under the banner "Ignite!"because of the enthusiasm for their faith of our young people demonstrated at a recent Youth Festival at Swaffham was so impressive.”

People of all ages walked in the procession but the youth of the Diocese of East Anglia played a prominent part.

Once in the Cathedral, an all-night vigil before the Blessed Sacrament led by parishes and young people began.

“The young adults who stayed on led prayer sessions and took part in various workshops through the night, including the painting of a new diocesan icon of Our Lady of Mercy.

“Earlier in the day, representatives from our schools from across the diocese gathered for Mass followed by a retreat led by the Diocesan Youth Service and the newly formed Ignite team,” Bishop Alan said.