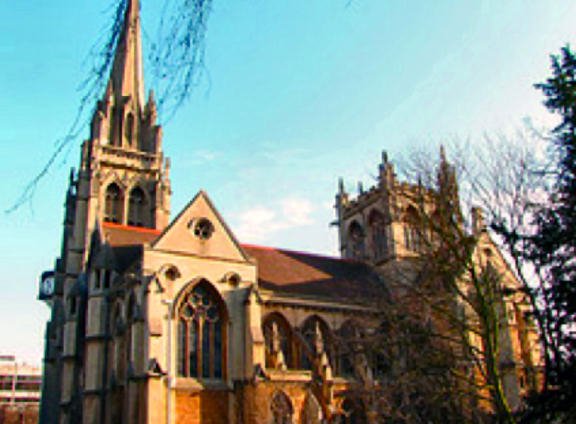 Our Lady of the Assumption and English Martyrs in Cambridge is celebrating 125 years since its consecration.

The building that stands at the head of Hills Road in the university city has become a "place of rest, beauty and grandeur to all who pass through its doors," according to ParishPriest Mgr Peter Leeming.

"OLEM forms the heart of a busy, diverse parish set in the midst of a city known throughout the world as a centre of historic learning, contemporary research and rich artistic creativity. Its liturgical life is a treasure that attracts young and old," he said.

The festival began on the Feast of Our Lady's Assumption on 15 August with Solemn Vespers and Benediction. It continued with Masses to celebrate the Blessed Virgin's Nativity and Our Lady of Walsingham as the Principal Patron of the Diocese.

Other Masses have included music by OLEM's choir and featuring many settings fromTallis, Byrd and other composers from the Tudor period.

There has also been a 125th anniversary lecture called Catholics under the Cross – Conformity and Martyrdom in Tudor England by Dr Richard Rex, Reader in Reformation History and Fellow of Queen's College, Cambridge.

A highlight was a walk along Tyburn Way in honour of the English martyrs led by broadcaster and journalist Joanna Bogle.

An essay competition was also launched to include young people in the celebrations. They were asked to choose one of the 171 martyrs and write about their lives and witness and why their example is relevant today. Primary school children were sent on an "angel hunt" in the church and to pick one of them to draw or paint.

Events still to come include a Solemn Requiem for departed clergy, parishioners and benefactors at 7.30pm on 6 November and an organ recital by Peter Stevens, assistant master of music at Westminster Cathedral, on Thursday 26 November at 7.15pm.

To mark the first Sunday of Advent a Choral Vespers will be held at OLEM on Saturday 29 November at 5pm.

On the Solemnity of the Immaculate Conception on 8 December the Inauguration of the Global Jubilee – the Holy Year of Mercy – will take place with Exposition of the BlessedSacrament from 2.30pm and a Solemn Mass at 7.30pm when the preacher will be Fr Alban McCoy, OFM Conv, Dean of St Edmund's College, Cambridge.