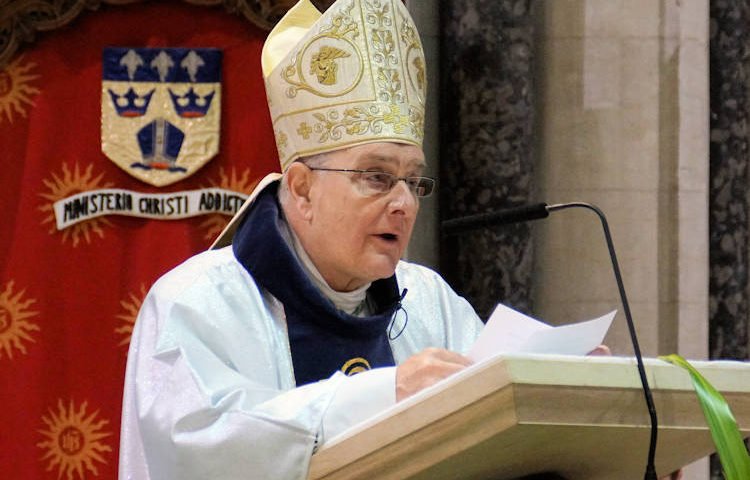 Bishop Alan Hopes has released a pastoral letter about Liberia, leprosy and Lent, to be read at all Masses celebrated in the Diocese over the weekend February 10/11.

When I was an auxiliary bishop in Westminster, I was privileged to make a pastoral visit to Liberia, an African country that was just coming out of eighteen years of civil war.

One day I travelled with the priests of the Mission Station, where I was staying, to visit a village which was four hours away and in the middle of nowhere.

It was cut off from the rest of civilisation. The people living there were both Christian and Muslim. Each one was suffering from leprosy. They had been placed there so that the rest of the world would be sheltered from their disfigurements and the possibility of infection.

Every week the Catholic Mission drove to the village to celebrate Mass and the sacrament of the Sick. At the same time, a surgery was opened to provide the necessary drugs and advice. Most of all, however, the team brought acceptance, love and healing into the lives of those most marginalised of God's people.

We do not hear much about leprosy in the developing world anymore. Thank God it is now treatable and often curable.

In the time of the Lord, however, leprosy was an appalling stigma. It not only meant suffering from a terrible and disfiguring disease. It also meant being put outside the town and being ostracised by all. It also meant religious death ' excluded from the religious life of Israel and any contact with God.

He must live outside the camp, the law stated in our first reading. And until a person was pronounced clean by the priest, that is where he or she remained.

At a deeper level, the words outside the camp, describe the fate of fallen humanity. We were cast out of Paradise through the sin of Adam and Eve. Sin has made us spiritual lepers.

Like leprosy which deadens sensation in the nerves, sin deadens our sensitivity to God's will. Like leprosy which, when untreated, can cause a person to lose a limb or even go blind, so sin unchecked, can grow in our lives until we can lose God's grace and friendship ' until we can no longer see him with the eyes of faith.

Just as leprosy is now curable so is the Fall and resulting sin.

Jesus Christ came into our world as our High Priest to pronounce us all clean. But first he became our Sacrifice to make us clean. It is by the shedding of his blood on the Cross that we are made whole and our life in Him is renewed.

There is a paradox in how this works! In today's Gospel, Our Lord heals the leper so that he might once again be restored to the community. But it is Christ himself who ends up taking the place of the leper, forced to live outside, like an unclean person. The Gospel tells us that Jesus could no longer go openly into any town, but had to stay outside in places where nobody lived.

And Jesus does the same for us. In order to become the healing sacrifice for our sins, Christ was crucified like a criminal outside the city of Jerusalem on the hill of Golgotha. Through his death and resurrection, we are restored to God's friendship and have the potential to enter the eternal city of heaven as redeemed citizens.

This is the wonderful mystery of God's grace!

We shall soon celebrate this great mystery of the Lord's Passion, Death and Resurrection in Holy Week. But first, as we enter the holy season of Lent, we are given the opportunity to prepare for this mystery.

Lent is a time when we are asked to do three things in particular a little better: prayer, fasting, giving alms. I am sure you will hear more from your priest how you can be helped to do this in your parish.

Whatever we do for Lent, remember to show the same love and compassion to those on the margins of society that Jesus shows for the leper in today's Gospel and for us as he offers himself for us on the Cross. It is important that we are merciful just as God has been merciful to us.

I hope you will particularly remember to help the two Diocesan supported Lenten charities – Aid to the Church in Need in their work of helping Christians to rebuild their lives and communities in Syria and Iraq, and Don't Screen us out which supports families of children with Down's Syndrome.

Lent is also a good time to remember those people that you may have put on the margins of your life and need your attention and compassion.

There is a fourth thing to put on that list of three. I encourage you all to make a resolution to go to the sacrament of Confession this Lent. Confession is a bringing of our spiritual leprosy to the Lord, who is both our Sacrifice and our great High Priest.

In this Sacrament, he accepts us and loves us, he forgives us and heals us, he pronounces us clean as it were, and reintegrates us into the life of his Church. No sin is too great for his mercy. No infection of our soul is too far developed for his compassionate and expert hands to heal. Let us come to him during these weeks of preparation and say to him: Lord, if you want to you can cure me! And we will hear him say to us: of course I want to! Be cured!

Please pray for me and be assured of my good wishes and prayers for a truly blessed Lent as we once again prepare to celebrate the mystery of our redemption in Holy Week and Easter.

Yours devotedly in Christ,