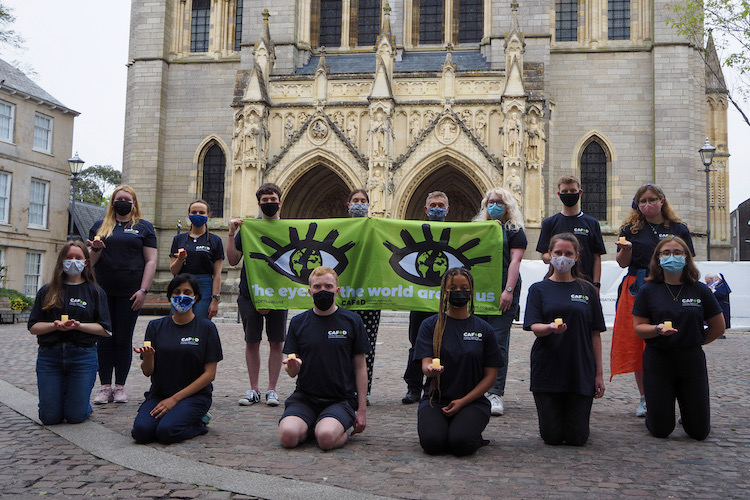 Joe Savage, a student volunteering with CAFOD in East Anglia, joined its youth delegation to the G7 conference in Cornwall. Here is his report.

Along with 15 other young adults between 18 and 30 from across England and Wales, I had the chance to join CAFOD’s G7 youth delegation from June 10 to 13. We came from different places, including CAFOD’s ‘Step into the Gap’ gap-year programme, and courses on international development at undergraduate or master’s level. We were brought together by our common interest in climate change and global justice.

Over the course of four days, we had many opportunities to make sure that our voices were heard on issues such as climate change, debt cancellation and vaccine distribution.

This started on the Thursday evening with an interfaith event at Truro Cathedral where we were joined by a large online congregation as well as spokespeople from different faiths and cultural groups from around the world, sharing their messages for the G7 leaders.

On the Friday morning, we went to St Mary’s Catholic School in Falmouth where we set up our main stunt for the trip. As part of the ‘Eyes of the World’ campaign, school children were invited to decorate a pair of eyes with their messages to the G7 leaders, to show that the eyes of the world were watching them. Our display was made up of 1,500 pairs of eyes decorated by school children from across Cornwall, Devon and Dorset.

That evening, we held a vigil in Porthkidney Beach, right next to Carbis Bay, in memorial to the 3.7 million people who had died worldwide because of Covid-19. This was a particularly moving part as it allowed us to feel close to the G7 event and, due to the time of day, we had a beautiful sunset across the sea which we could appreciate while praying for the victims of the pandemic.

On the Saturday, we returned to the beach, this time in Falmouth, to join Surfers Against Sewage in their paddle out. While we were unable to join them out at sea, we campaigned along the shore with placards made the day before, on topics such as climate change and environmental protection. Later that morning, we were joined with representatives of the Jubilee Debt Campaign and went along the beach raising the issues of the global debt crisis.

Later in the day, we went into Falmouth where we dressed up in white crime scene suits to campaign for easier access to vaccines for Global South countries through better distribution and the removal of patents to allow for the cheap and easy production of the vaccines worldwide. This included demonstrating in front of the media centre in Falmouth where we were joined by other protesters and members of the public.

Finally, on Sunday morning we attended a local Mass where we were commissioned as campaigners by the priest. That afternoon, several members attended the start of the Young Christian Climate Network’s (YCCN) relay from Truro cathedral to Glasgow in time for the COP26 conference in November.

If you would like to hear more about my experiences in Cornwall, feel free to email me at jsavage@cafod.org.uk to arrange a talk with your local parish or community.

In addition, you can find out more about what was agreed upon at the G7 summit by reading the official communique found here as well as CAFOD’s statement on what was agreed here.

Finally, there is still plenty of time to arrange a meeting with your local MP before the summit in November. To find out more information on how to take part, follow this link here or contact me on the email provided above.

Pictured above is the CAFOD youth delegation, including Joe Savage, in Cornwall.