Paula provides some direction for the spiritual journey 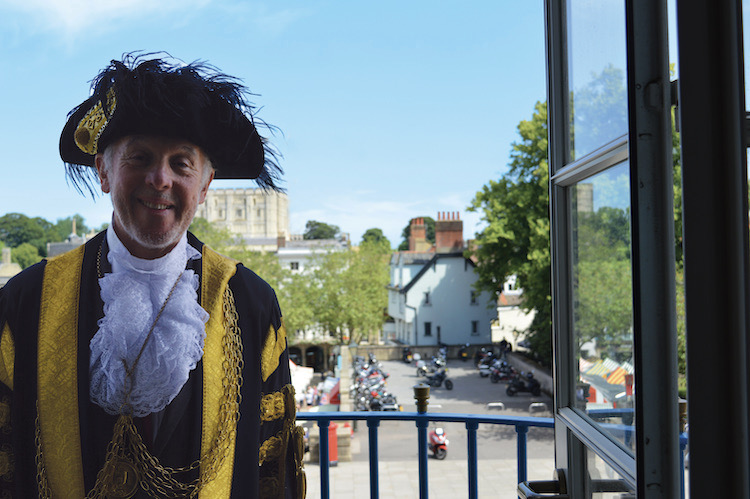 For the second time in a row, an active member of St John’s Cathedral parish has been elected Lord Mayor of Norwich. Here Kevin Maguire shares his story and his vision for the city.

I am so proud to have been elected as Lord Mayor of this City. I was going to say “greatest city in the world” but that is not the Norwich way: one of the reasons I love Norwich so much is that it does not boast; it is a wonderful place of understatement where superlatives only detract.

Thank you, Vaughan, for your remarkable magisterial role for the last two years.  You have been Lord Mayor in a most historic time facing a pandemic the like of which the city has not seen for over a hundred years. You have done so with great statesmanship and kindness.

I will use my year to give voice to everyone in the City. That will include promotion of the City’s fantastic commercial, scientific, and innovative industries. To this end, the Sheriff and I will work particularly hard in strengthening the links with our twinned cities in both Europe and beyond.

I want to say a little bit about my background in order to explain my plans for the year. I grew up on a council estate. As a Roman Catholic, I became the beneficiary of a peerless, state-funded education provided by Jesuits.

As a Catholic in 1950s and 60s, I experienced the bigotry that many experienced.  As late as the 1980s, I was refused a job for being a Catholic (this was before the Equalities Act and faith was not then a protected status). My faith has been an important guide throughout my life, especially in relation to ethics and action. And the Civic Life is all about helping others.

It is for this reason that I want, during my year, to call upon the major faiths in Norwich plus the Humanist Society to provide members of a seminar group to meet three times over the year to discuss some of the ethical dilemmas faced in public service. I see them as the modern equivalent of the long-pensioned-off office of Lord Mayor’s Chaplain.

I have learnt over my life how essential education is. For a truly inclusive society, everyone must get the best start: they have a right to reach their full potential. It breaks down the class system and gives opportunity for a person to make their full contribution to our society.

It is for these reasons that I want, during the Civic Year to promote Early Years Education and, to this effect, I am writing to Norwich’s Higher Education Institutes (which includes two world-leading Universities) and ask them to support a series of Lord Mayor’s Lectures. The lectures will be there to promote to everyone interested major aspects of early-year development.

Editor’s note: Labour councillor Kevin Maguire became Lord Mayor in a joint ceremony in which Caroline Jarrold, Community Affairs Adviser at Jarrold and Sons, was appointed Sheriff of Norwich. They replace councillor Vaughan Thomas and Dr Marian Prinsley respectively. The ceremony was the first in two years, since the pandemic had forced the former Lord Mayor and Sheriff of Norwich to stay in post.