Call to respond to Pope’s challenge for Peace Sunday

Call to respond to Pope’s challenge for Peace Sunday 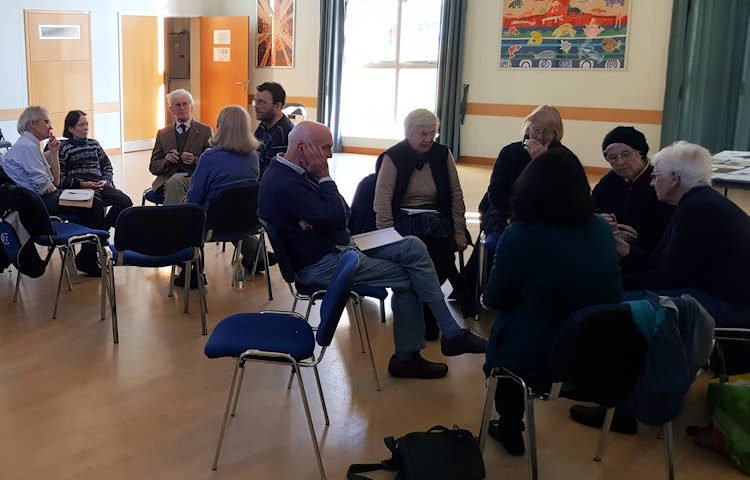 The Justice and Peace Commission in the Diocese of East Anglia have urged people to respond to a challenge from Pope Francis on Peace Sunday (January 14) and reported on a Day of Reflection on a non-violence response to injustice.

Sunday January 14 is Peace Sunday, a day of special prayer for peace in our world. This year, Pope Francis has chosen the theme "Migrants and Refugees: Men and Women in Search of Peace"

John Bell, chair of the Diocesan Justice and Peace Commission, said: "Last year's Peace Sunday theme on Non-violence was taken up enthusiastically in the Diocese and led to a successful day of reflection in November (see report below). In 2018, let us all respond prayerfully and energetically to the Pope's challenge to welcome migrants and refugees in our towns and communities."

For further ideas and resources for parishes go tocatholic-ew.org.ukand paxchristi.org.uk

"Resisting and challenging injustice ' why choose the way of non-violence" was the theme of a Day of Reflection held by the Diocesan Justice and Peace Commission in Newmarket on November 25, reports Bernard Shaw.

This was inspired by the 2017 World Day of Peace message in which Pope Francis advocated non-violence as a way to peace between individuals, within society and in international life, even where conflict looks inevitable.

The day was led by Passionist priest Fr Martin Newell. He began by explaining how active non-violence, praised by Jesus in the Sermon on the Mount (Matthew 5 & Luke 6: turning the other cheek, walking the extra mile etc) can be used to transform an unjust situation.

The insights into the cultural context given by Walter Wink lead to a radical rethink of these texts, far from meek passivity. Pope Benedict XVI described the Sermon on the Mount as the magna carta of Christian non-violence. Active non-violence tries to show up the injustice of a situation so as to change it; to challenge something everyone takes for granted; to assert the humanity and dignity of the victims of injustice; to break cycles of humiliation; or to be willing to suffer rather than retaliate with violence. One example cited by Fr Martin was that of women, in a South African shanty town under threat of demolition, removing their clothing so causing embarrassed bailiffs to abandon their operation.

Fr Martin illustrated his talk with examples of papal statements on non-violence. For example in 2007, Pope Benedict XVI said "for Christians, non-violence is not merely tactical behaviour but a person’s way of being." Of course, there is a tension between the principles of non-violence and the Church's acceptance that, as a last resort, use of force is legitimate as a means of national self-defence. But the Church also recognises the right to conscientious objection, the patron saint of which is St Martin of Tours, a reluctant Roman who said that as a soldier of Christ it was not lawful for him to fight.

He also highlighted Pax Christi's seminars on Non-violence works!, part of the global Catholic Non-violence initiative, https://nonviolencejustpeace.net/ . There, Maria J Stephan talked about her own research with Erica Chenoweth showing that, in the twentieth century, non-violent civil resistance had been about twice as effective as violent campaigns. (See more athttp://paxchristi.org.uk/resources/ )

Lively debate on Fr Martin's presentation was followed by smaller and more informal discussion during lunch. Then, we heard from J&P members with experience of violence, not necessarily physical, in particular circumstances.

Colin Allen is a trustee of the Prison Reform Trust and has a wealth of experience of governing and inspecting prisons. He explained that the level of violence in prisons is demonstrated by the large number of incidents of self-harm (41,103 in the year to September 2017, including 77 suicides) and the number of assaults (27,115, most of which were on fellow prisoners). He suggested that there many factors contributing to violence in prisons especially the high prison population (86,000 in September 2017), but also reduced numbers of experienced officers, frequent movement of prisoners, insufficient time for constructive activities, large proportion of prisoners with serious mental disorders, growth of gang culture, availability of drugs and legal highs.

The Ministry of Justice has policies to reduce the risk of prison violence, including ensuring that prisoners can lead good and useful life after prison and management of very difficult prisoners through small units within larger prisons. But these are hard to achieve. Many prisoners are having to cope with deep problems. Compared with the general population, they are more likely to have regularly truanted / been permanently excluded from school, used class A drugs, been unemployed before custody, observed violence in the home as a child, been taken into care as a child.

Ronald Haynes, a long-standing trades union officer, spoke of peaceful resolution of conflicts and bullying in the workplace, making particular reference to government guidance and the policy of some employers. In Matthew's Gospel (Mt 5:21-26 & 18:15-17), Jesus stresses the importance of resolving difference by dialogue without delay, involving third parties as appropriate. The same principles apply to present day guidance.

In both cases, good questions prompted answers with more insights. Interesting discussion could have continued had time permitted before the final liturgy. Both Colin and Ron would be willing to be contacted by anyone interested to hear more. The Day had benefited from attracting a number of newcomers as well as Justice and Peace veterans.

We hope the Day will encourage prayer and more support for chaplaincies in prisons and workplaces, as well as for those involved in the rehabilitation of prisoners.

Pictured above are delegates in discussion groups during the Day of Reflection in Newmarket.