Candidates advance on the road to the Diaconate

Candidates advance on the road to the Diaconate 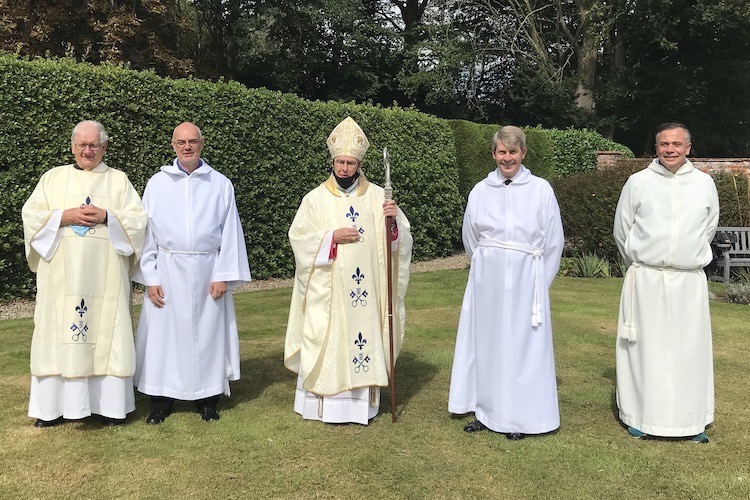 One of the three men in formation is entering the third year, and the others are in their second year. The course lasts four years, the first of which is a year of enquiry and prayerfulness known as the ‘propaedeutic’ year, while the second and third are taken up with a degree programme supported by St Mary’s University in Twickenham. The final year is advanced formation in Catholic social teaching together with hands-on liturgical formation, including singing lessons.

The candidate entering his third year is Gianluca Savini, who is from St Laurence’s parish in Cambridge. During the Mass in Poringland he was appointed a ‘lector’ (reader), was handed a copy of the Bible by the Bishop and made a pledge to study it more deeply.

The other two candidates who have just completed their year of enquiry and are beginning the full formation programme are Paul Raynes from the parish of St Etheldreda in Ely and Derek Williams, who lives and works at the Shrine of Our Lady in Walsingham. They were formally admitted by Bishop Alan as ‘candidates’ for Holy Orders.

Because of the current restrictions the three could not have as many people there to support them as they would have liked, but each was supported by their respective wives Erminia, Sarah and Lynn and their twelve children (four each – that is not a precondition for becoming a deacon).

The experience of teaching and studying remotely since March has been found to be good but much less good than working together. And so huge efforts have been made to make it possible for all the candidates to study and learn together.

Their formation would normally take them every three weeks or so on a Saturday to St John’s Seminary in Wonersh, each day consisting of  four lectures, three liturgies, an hour with their diocesan formation team (and a good lunch) but the seminary is currently closed to all but resident seminarians and staff. But undeterred by the current circumstances, and with a lot of social distancing and hand cleansing, the fifty or so candidates from across the dioceses of southern England are making their way to St Mary’s University at Strawberry Hill (Twickenham), for the same programme and with liturgies in its splendid chapel.

There will be no let-up in the relentless series of essays to be written and meanwhile they will all be undergoing not only academic but also personal, spiritual and pastoral formation, both in the diocese and at two long weekends at a conference centre in Hertfordshire and on retreat in Walsingham. So they need our prayers for stamina as well as discernment.

Pictured above is Bishop Alan with the men in formation, with two lectors also in training. Picture by Zyg Racowicz