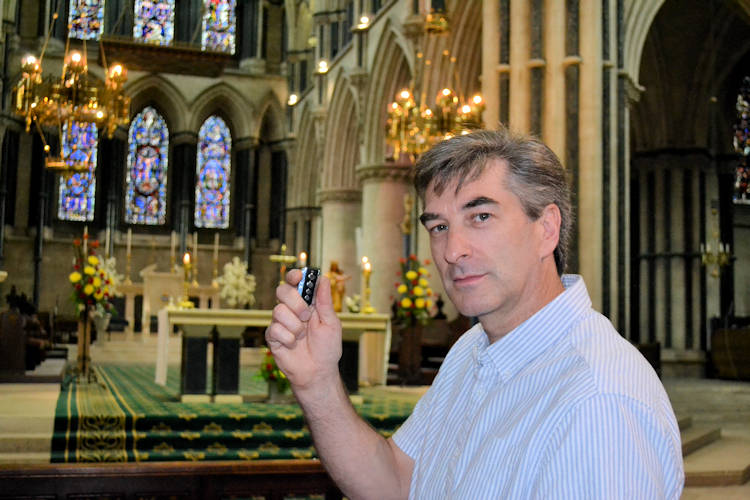 When the coronavirus pandemic lockdown restrictions came into force across East Anglia, closing churches overnight, the Diocese of East Anglia only had two churches across its 51 parishes with the capacity to live-stream Masses. Keith Morris reports.

Even the flagship St John’s Cathedral in Norwich had no means to broadcast its Masses to thousands of parishioners at a time of unprecedented spiritual need.

Director of Music, Daniel Justin, stepped into the breach and quickly managed to set up a home-made webcam system, right in front of the altar, to provide a picture and rather echoey sound. But it worked and online audiences, which reached over 3,500 for some key Easter services, demonstrated the strong demand for online Masses.

Within a few weeks, up to 20 Catholic churches across East Anglia had set up similar home-made solutions, broadcasting from churches (when internet connections permitted) and even presbytery hallways.

Pretty soon, Daniel realised that a more professional and permanent solution would be needed as, even when lockdown has eased, restrictions will remain and there will still be a need and a considerable audience for online Masses and other services.

Daniel turned to Darren Butler, owner of South Norfolk-based Audio Electronic Design which, over 30 years, has supplied audio and audio-visual systems to literally hundreds of churches across East Anglia, including St John’s and two other cathedrals. 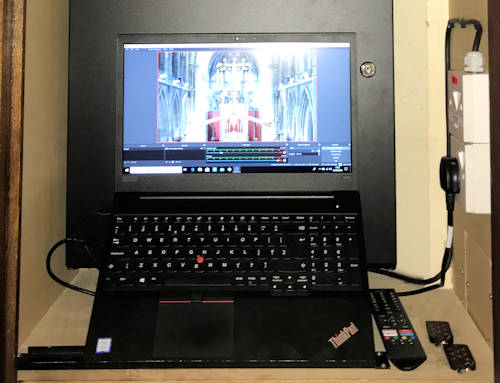 Darren started his audio engineering career over 30 years ago in a Cambridge music shop, when he was asked to repair a Yamaha electric organ by a Catholic priest from St Laurence’s.

This led to him designing and installing a new sound system at the church and, through word of mouth, he quickly moved on to a sound system for St John’s Cathedral no less.

Some 30 years later Darren’s firm is a market-leading installer of audio, and more recently audio-visual, systems in places of worship across Norfolk and Suffolk

As soon as churches were forced to close their doors in March and live streaming became the hot topic in church circles, Darren started thinking hard about what he could see was going to be an urgent need to provide a more professional, and permanent solution, for churches across the region.

When Daniel contacted him and he went back to look around St John’s, Darren was already working on creating a cost-effective twin camera system that he says can be adapted to churches big and small. Once set-up, it can provide multiple camera views and angles, yet be controlled simply with a small remote control device and no other operators needed to replicate what much more expensive systems offer.

“The beauty of the PTZ system is that it provides up to 16 different shots from just two fixed cameras,” said Darren. “They can zoom, pan and tilt and are fully controllable from a small hand-held radio-controlled remote control, that the priest or a member of the congregation can easily operate. There is no need for camera or control desk operators as all the shots from the cameras are pre-programmed and transition automatically at the press of a button.

“I see this system being a simple long-term solution for those churches which want to stream services but want to do so with as little involvement as possible. It offers a sustainable solution which is both cost-effective and much more engaging for the viewer,” said Darren.

“We use two high-definition cameras in fixed positions, one close-up to the altar and the other one further back in the church to ideally give a wider view of as much of the church as possible. We can include a small TV monitor so that whoever is controlling the system can see what is being broadcast and also a small computer to control the system, with a joystick if required, unless a church already has one which we can adapt.”

Darren says the system can be adapted to suit the needs of everything from a cathedral to a small chapel and, because of his good connections with suppliers, can provide and install it at a very a cost-effective price. He is also working on a smaller single fixed camera solution which can be upgraded at a later date if required. Years of experience means he is also used to installing the equipment discreetly and in line with any historic buildings regulations.

The system can broadcast live online and be recorded and, Darren believes, will also come into its own for events such as weddings.

Cathedral music director Daniel has certainly been won over: “The real benefit of the AED system is the ease of use as it is totally automatic and allows the cameras to move seamlessly from one close-up shot, via a wider shot, to a different close-up position. This gives not only a professional edge, but an incredibly simple user experience.”

And, he believes, the system will be of great benefit long after lockdown ends.

“I think it has become very apparent that many people have gained a lot from our broadcasts,” said Daniel. “People who have not been able to attend Mass for many years before this pandemic have been grateful for the opportunity to do so. We will be continuing broadcasting Masses from the Cathedral as we return to public Masses, as it is clear they have meant a great deal to a great number. We have had people watching from America, Canada, the Philippines, Australia, and Dubai – it’s wonderful to be able to share our liturgy and our wonderful building with all these people.

“The work of Darren’s team has been exemplary, and their sensitivity to installing in a Grade 1 Listed building has been really careful. Every detail has been attended to, and the system has been a real investment. I have recommended AED to anyone who has enquired, and I will continue to do so.”

Pictured top is Darren Butler from AED at St John’s Cathedral in Norwich with the simple remote control for the camera system and, above, the control cabinet for an AED system at Our Lady of the Assumption and The English Martyrs in Cambridge, which has also just been installed by the company.

You can see the St John’s system at: sjbcathedral.org.uk/live

Watch a video about the Twin Camera system below or at: https://www.youtube.com/watch?v=58Ksx2Klq-Q