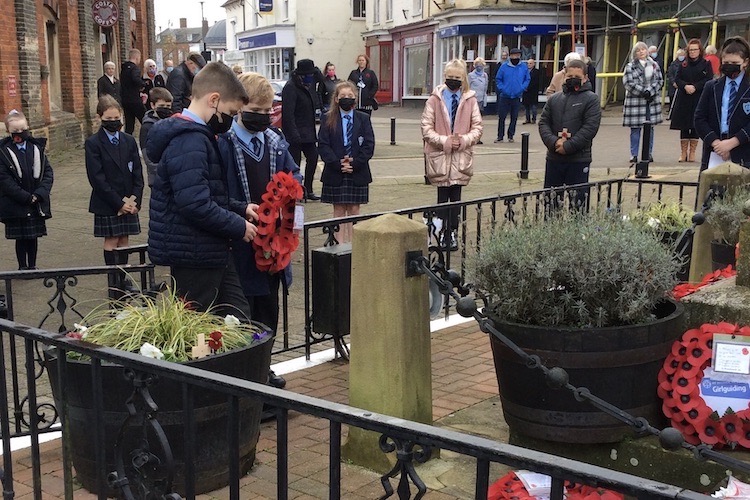 Children from the Sacred Heart School in Swaffham once again took part in a Remembrance Day service this year. Amelia from Year 6 wrote the following report.

Years 5 and 6 walked to the war memorial in Swaffham to remember those who gave their lives for our country in World Wars 1 and 2, and all other wars around the world since then.

We saw a large gathering of adults bowing down to the memorial. I read a poem called In Flanders Fields written by Lieutenant-Colonel John McCrae in 1915. He was inspired to write it after presiding over the funeral of a friend and fellow soldier.

Our form and vice-captain, Dexter and TJ, laid a wreath and made the sign of the cross and we all thought about those brave people.

Our Lead Governor Flavio Vettese walked with us and Father Mark [Hackeson]. Father Mark led the service and prayed for all those dead soldiers. All of Year 6 laid a cross from each class in school and then we observed the two-minute silence.

Sacred Heart is the only school in the town to attend the memorial, and for as long as I can remember (my daughters attended from 2004), the school has taken part in the Royal British Legion Remembrance Service in the Anglican church of St Peter and St Paul.

This couldn’t take place this year but usually the service is exceptionally well attended and is that lovely mix of generations coming together in memory of those who gave their lives and to honour those veterans in attendance for the service they gave.