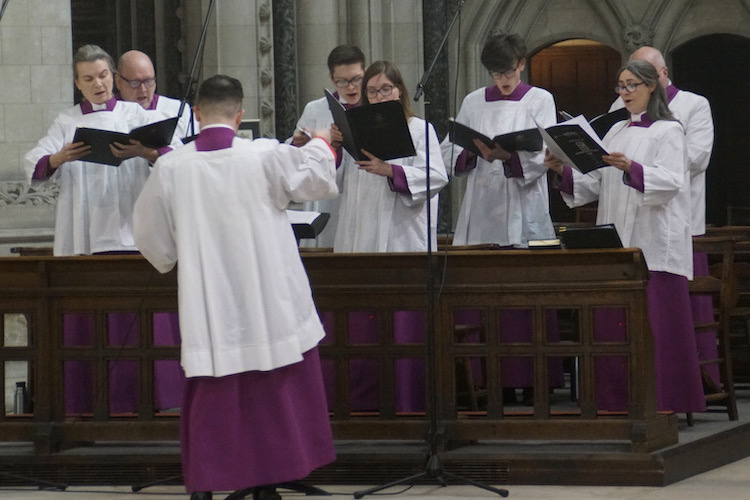 In spite of government restrictions on singing in church, Daniel Justin from St John’s Cathedral has been imaginatively keeping music alive.

“The topic of singing has been very widely discussed,” comments Daniel, who is Master of Music at the Cathedral. “We have been able to have the professional Schola singing at Mass, which has allowed all of our Liturgies to be sung as usual, although it has been a sadness not to be able to welcome members of the Parish Choir to return to sing. All of the singing has been undertaken in a really safe way, with the Singers effectively occupying their own Transept in the Cathedral – the joy of having so much space! But we’ve still limited our numbers to only the maximum of eight.

“We are hoping to relaunch the Parish Choir to sing at the Sunday 5:30pm Mass from September, when things will have hopefully opened up a little more, and we will be reaching out to those who might want to try singing in a choir for the first time.

“The recent government guidance has allowed Children’s Choirs (as after-school activities) to take place, meaning that our Cathedral Choristers (children aged 8-14) have been able to rehearse and sing at Mass, which has been brilliant. We were even able to hold our ‘Be a Chorister for the Day’ event, welcoming 120 children (in class bubbles) safely to the Cathedral.”

Meanwhile, at the Anglican Cathedral in Norwich, Master of Music Ashely Grote has added his voice to those who would like to see more freedom for singing in church. He commented that there was a “lack of logic” from the government in preventing people from singing quietly. “There needs to be an element of common sense in taking Covid into consideration,” he said.

Members of the House of Lords have got increasingly frustrated at the seeming inconsistencies in the Government’s approach to people singing together in an amateur setting indoors. While professional choirs are allowed to rehearse and perform, amateurs cannot.

The large gatherings of fans at Euro 2020 matches and Wimbledon have exacerbated the feeling of unfairness among churchgoers who watch thousands of people cheering, shouting and singing and then cannot sing, socially distant with masks, in a church building of any size.

On June 28, Theresa Villiers MP asked Sajid Javid: “Now that thousands of people are allowed to gather together at a football match to shout and cheer as much as they want, is it not time that we allowed congregations in church to sing hymns together?”

The new Health Secretary replied: “I can tell my Right Honourable Friend that that is certainly what I would like to see and it is certainly my intention to allow that to happen as soon as possible. When it does, I hope we can sing a hymn together.”

Pictured above is Daniel Justin leading the choir at St John’s Cathedral.

Quotations on Parliamentary debate from EDP.