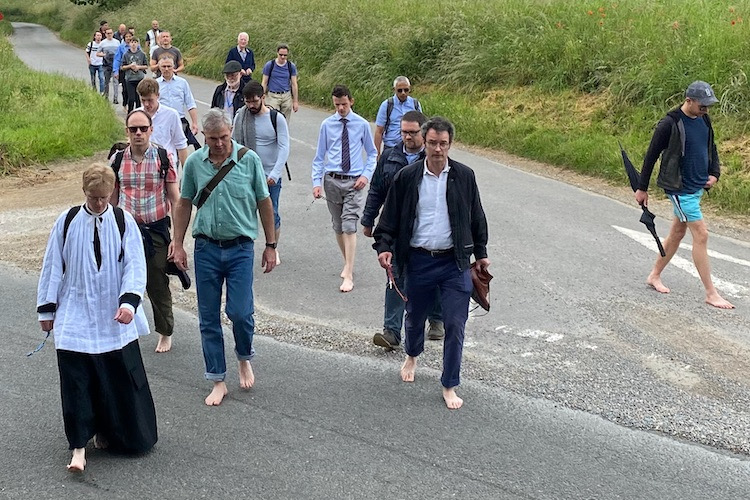 Twenty-six men from across the diocese and beyond joined Fr Henry Whisenant for a men’s retreat at Walsingham on Saturday.

They were drawn from a variety of East Anglian towns – Cambridge, Bury St Edmunds, Norwich and Cromer – as well as places further afield, including Hertfordshire, Essex and London. One man had made a five-hour trip from Warrington, another had cycled to Thetford, taken his bike on the train to Sheringham, and then peddled the final 20 miles to Walsingham.

The retreat had been organised by Damian Wallace and John D’Mello from the Diocesan Marriage and Family Life Commission. Both are on the staff at St Benedict’s Upper School in Bury St Edmunds, teaching RE and Physics respectively. This was the third men’s retreat they had arranged, the first being in Newmarket, and the second having been postponed due to Covid.

In this Year of the Family, Fr Henry took as his theme St Joseph as a model of prayer and virtue. He recalled some of saint’s traditional titles – Nursing father of the Pastor of the Universe, Redeemer of the world’s Redeemer, model Workman – and then suggested one of his own: Friend of the Angels.

St Joseph, he suggested, was “an intimate of the heavenly host” who had been guided in dreams by angels on four occasions: in the annunciation encouraging him to take Mary as his wife, in the warning to flee to Egypt and in the directions to return to Israel and then move to Galilee. He was, commented Fr Henry, “not a distracted man” and therefore a good teacher of the interior life.

Fr Henry laid before retreatants the wisdom of many saints down the ages, among whom St Teresa of Avila and St Alphonsus Liguori emerged as clear favourites. The practice of mental prayer or contemplation, he said, “brings truths out of dusty drawers and gives them the power of action”. He encouraged the men to clear the debris of distraction so that they could pray well in a world where “click-bait makes us spiritual rubbernecks”.

Turning to St Joseph as a model of virtue, Fr Henry took a very practical approach, looking at the actual process of laborious change towards a more virtuous life. “What helps, carry on with. What doesn’t help, ditch,” he suggested.

Joseph, he pointed out, was unique: living with the Son of God and the Immaculate Conception, he did not have to exercise at home what used to be called “the virtue of vengeance”, correcting the actions of his family. For him the just life was simple like light whereas for us “virtue is refracted into its constituent colours” as we live closely alongside the imperfections of others.

Unlike St Joseph, he said, we have to deal with concupiscence, “like a flat tyre making it hard for us to drive straight”. Still, he was essentially hopeful about living a virtuous life: it was pessimistic, he felt, to suggest that people couldn’t help living in mortal sin. As a step towards a remedy, he recalled a simple adage from the psalms once quoted by the Curé d’Ars: “turn from evil and do good”.

The two talks were framed around by a Mass celebrated by Fr Philip Moger – in the open air for the men, as the Church of Reconciliation was full of Marist pilgrims. Afterwards the men walked – mostly barefoot – the Holy Mile into the village of Little Walsingham and knelt for a final prayer and blessing at the abbey gates.

Back in Withermarsh Green in Suffolk, Fr Henry will be relaunching his popular “Peter’s Pints” events, combining spiritual uplift with real ale. This time there will be a focus on poetry and art.

He has also initiated a ‘Guild of St Joseph’ for men, which has a simple rule of life, including monthly confession and a daily rhythm of half and hour’s meditation, an examination of conscience, and praying five decades of the rosary. So far it has twelve members.

For more information about either initiative, you can contact Fr Henry on henry.whisenant@rcdea.org.uk

To see a Flickr gallery of the men’s retreat, please click on this link or the picture below. 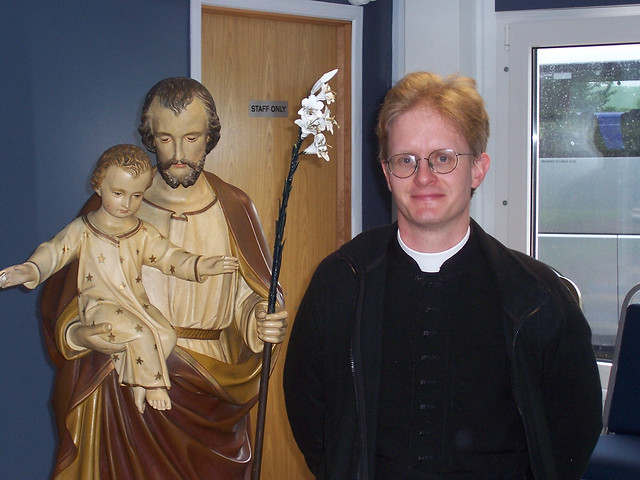