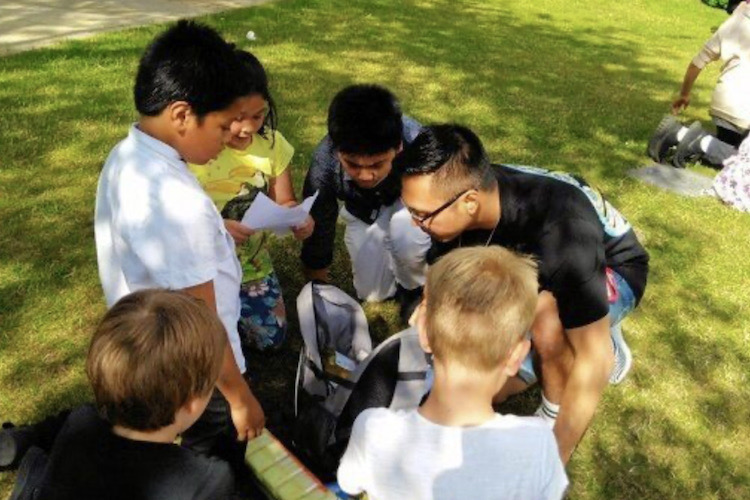 As Pope Francis directs the attention of the world towards refugees, the Diocese of East Anglia continues to extend its own work with migrants and asylum seekers.

In Norwich, the Justice and Peace Group at St John’s Cathedral has now been running The Welcome Rucksack Project for five years. It provides rucksacks for adult asylum seekers and children of refugee families. Its co-ordinator, Carol Chilton, was approached by Martin Nisbett, a steward at Chapelfield Road Methodist Church in Norwich, who was keen to collaborate rather than start a similar project themselves.

“A generous grant of £350 from Martin specifically for rucksacks for children of refugee families from Afghanistan has boosted the funds of the project,” said Sarah Ebelewicz, who leads the Justice and Peace group at St John’s Cathedral. “It enabled us to provide 51 rucksacks for ages ranging from toddler to teens. Each rucksack costs between £30-£35 (rucksack and contents) so the grant from the Chapelfield community was very timely. We have found God always answers our prayers in relation to funding for this project.”

One of the hallmarks of the project is the links that the group has forged with ecumenical partners including English+, which is based at Holy Trinity, an Anglican church in Norwich. Other longstanding partners include Notre Dame High School and The Octagon Unitarian Chapel. The Unitarians donated £200 in the autumn of 2021 and Caritas also approved a grant application for £500.

Alongside these existing partnerships in Norwich, Bishop Alan Hopes recently met a representative from New Routes, another charity which works with migrants and asylum seekers in Norfolk, and which is interested in developing links across the diocese. You can contact New Routes at: richardevans@newroutes.org.uk.

In Cambridge the Deanery has been registered since 2017 as a supporter of Cambridge City of Sanctuary. “From time to time, City of Sanctuary issues appeals to several refugee support groups in Cambridge and district,” explains diocesan representative Bernard Shaw. “Most recently, in September, there was an appeal from Cambridge Ethnic Community Forum Refugee Services (CECF) to assist their efforts in supporting refugees from Afghanistan in partnership with local authorities, and this was included in parish newsletters.”

Cambridge illustrates the way in which the diocese is working in partnership with a range of organisations. CECF is an umbrella group which provides advice and practical help to asylum seekers and refugees. It in turn collaborates with other local charities including the Cambridge Refugee Resettlement Campaign (CRRC), which assists refugees and provides guidance to landlords. Also linked in is the Cambridge Convoy Refugee Action Group, which transports donated clothing to Calais. The Catholic community often supports these initiatives though a generous response to appeals.

Nearby in Sawston, Our Lady of Lourdes has been running refugee projects in partnership with the housing charity Hope into Action.

“It has been five years since we, as a parish community, embarked on our partnership with the charity Hope into Action,” explains Fr John Minh. “Hope into Action works with church communities to provide housing and support for vulnerable groups and in particular those previously homeless, those having just left prison and those who are refugees.  All these groups have a common need: they lack a natural network of support, and that is what the church community sets out to provide.

“We support two houses in Sawston, both purchased by groups of benevolent investors. One is dedicated to men who were previously homeless; the other house accommodates a family of Syrian refugees.”

The support for these two houses in provided by 12 parishioners who meet at least weekly with the tenants of the houses and offer a range of support. This can be simply listening sensitively and talking through the challenges being faced. Volunteers also help by writing CVs, helping residents prepare for interviews, signposting opportunities and services and helping with the development of practical and language skills. There is also a steady stream of critical day-to-day issues such as helping with the purchase of school uniforms; providing emergency food supplies when there is a delay in benefits payments or sourcing donated laptops so that vital links can be maintained.

“Including our present tenants, we have been able to offer support to nine men who were previously without an address,” said Fr John. “Having an address is vital in so many ways not least when claiming benefits and applying for jobs.  Almost all the men have moved on to their own accommodation and some have gained full or part-time employment.

“The four children of the Syrian family all attend local schools. They speak fluent English and, as children are apt to do, they have adapted well to their new lives.”

Meanwhile, in Peterborough, the Catholic community has been helping asylum seekers since at least 2016, when Sr Mary Clare Mason met city council officers and shared a plan to welcome 20 Syrian families over a four-year period.

The Peterborough Community Assistance Scheme was set up, bringing together Foodbank, a project called Care Zone which supplies furnishings, a credit union, the Department of Work and Pensions and We, which provides white electrical goods. A faith partnership was also created, involving Hope Peterborough, Churches Together in Central Peterborough and the Inter-faith Council.

Support for refugees and asylum seekers will continue be an important focus for the diocese in 2022, as Caritas East Anglia encourages and builds on existing initiatives. If you would like to share what your parish is doing, or have ideas about how this area of work could be developed, please contact Caritas Development Worker Jacinta Welch on caritas@rcdea.org.uk

Pictured above is the youth group at St John’s Cathedral helping with The Welcome Rucksack Project.