Climbing, dancing, getting lost and Mass in Panama City 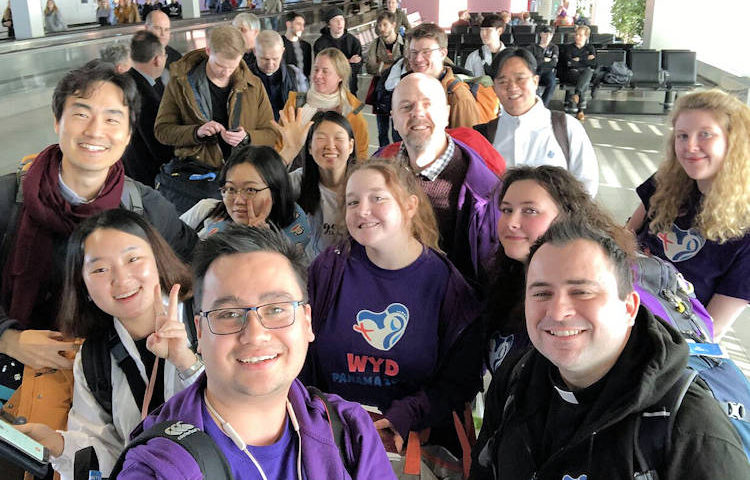 A group of young people from the Diocese of East Anglia has flown 5,400 miles to Panama on the first day of their World Youth Day adventure, while a Vigil to coincide with the event is planned for Peterborough.

Six intrepid pilgrims set off from Norwich Airport for a very early morning flight to Schiphol Airport near Amsterdam. They were Fr Luke Goymour, youth director Hamish MacQueen, Jessica McCall from Ipswich, Clive Sheridan from Peterborough and Bridget Holmes and Lauren Thorpe from Norwich, along with a statue of Our Lady of Walsingham.

At Schiphol Airport, Fr Luke conducted a Mass for the group and they met other pilgrims heading for Panama in the form of a group from Korea, (pictured above), before catching the plane to Panama City.

Jess McCall said: “We left freezing cold East Anglia for sunny Panama having been up since 3am. First we flew to Amsterdam where we had Mass in the meditation room in the airport. The chaplain had everything ready for use when we arrived even though he wasn’t expecting us. We also bumped into our first group of World Youth Day pilgrims who had come from Korea.

“The flight to Panama seemed to be mostly filled with people who were going to World Youth Day. We also met people from Poland, Switzerland, the Netherlands and Italy.  We finally arrived in Panama 5pm local time and got our transport to the hotel. After some much needed food we were finally able to get some sleep 24 hours after some of us had woken up.”

Meanwhile, back in East Anglia, a youth prayer vigil is being planned in Peterborough to coincide with the WYD evening vigil in Panama with Pope Francis on Saturday January 26.

It will take place at St Oswald’s Catholic Church, from 7.30pm to midnight with people welcome to come and go throughout the evening.

Ignite team leader, Catherine Williams, said: “The vigil is aimed at those aged 16+ and there will be adoration throughout with some worship and reciting hours of the Divine Office.  Our intention is to focus the prayer on interceding for the young people of the world and the people of East Anglia. We will also be having refreshments in the hall and hopefully inviting people in off the streets to come in and light a candle.”

The Peterborough vigil timetable is:

19:30 Exposition of the Blessed Sacrament
Divine Office (evening prayer of the Church)
Live music (ending before 20:30)

22:30 Rosary for the young people of the world and the people of East Anglia

23:15 Lectio Divina on the WYD Theme (the Annunciation)

23:45 Blessed Sacrament is reposed and Night Prayer to end by midnight

A regular blog will be published following the East Anglia group’s adventure in Panama. Follow it at: www.rcdea.org.uk

Pictured above are the East Anglia group at Schiphol Airport in Amsterdam with other pilgrims from Korea, all on their way to World Youth Day in Panama.