Focus on slavery at St John’s Cathedral talk in Norwich

Focus on slavery at St John’s Cathedral talk in Norwich 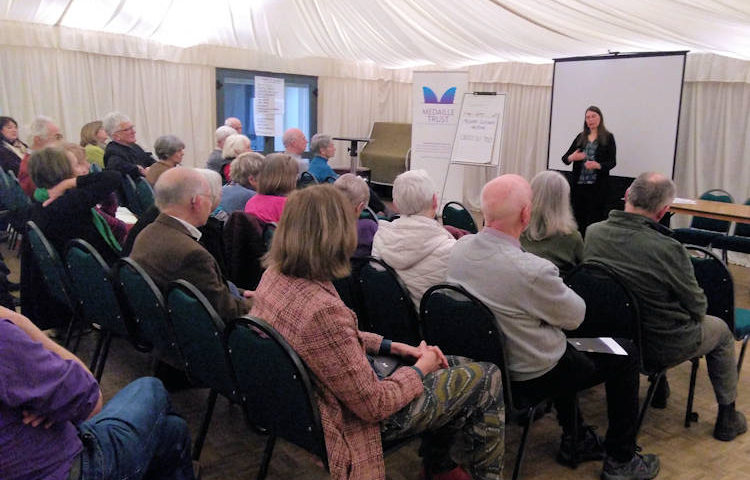 Modern-day slavery and the work of the Medaille Trust was the subject of an engaging talk at St John’s Cathedral in early February reports Sarah Ebelewicz.

Around 40 people from parishes in Norwich, Wymondham, Aylsham and Thetford gathered at the cathedral Narthex to hear Jacinta Goode, East Anglia rep for the Medaille Trust.

In a thought-provoking and challenging talk entitled’ Modern Slavery – a Christian Response’, Jacinta outlined the history of the charity. Founded in 2006 by Sr Ann Teresa in Southampton, who set up a safe house for trafficked street workers, it has since become the largest provider of safe house accommodation to victims of modern slavery in the country.

The Medaille Trust also provides clients with a breathing space, safety, specialist services for support and rehabilitation to begin to rebuild their lives and move forward.

Why should we as Christians respond?

The scriptures encourage us to defend those who can’t speak up for themselves ie Proverbs 31; 8-9. In the gospels we see Jesus gravitating to the hungry, the weak, the outcast and we, as his followers, need to do likewise. Modern slavery and human trafficking is a scourge on the body of Christ, in which we are all one said Pope Francis in Pastoral Orientations on Human Trafficking.

How can we respond?

We can pray for victims and traffickers and pray for peace. Human trafficking is the extreme end of modern consumerism. Let’s buy more fairly-traded goods and question how and where are garments are made and our food is produced. Get involved in campaigns such as ‘Who picked my tea’ by Traidcraft Exchange to hold tea producers to account. Let’s be aware of our neighbours, the people on our streets. Traffickers actively seek out those on the streets who are homeless, vulnerable and those being released from prison.

What to look out for

People who have been trafficked into slavery are often living in appalling conditions, with little or no pay. If a foreign national they will have their passports/papers taken. They will be fearful of the authorities and may show signs of sustaining physical abuse ie bruising. They may be malnourished, unkempt and may be anxious about talking about their situation.

The evening was hosted by the Norwich Justice and Peace Group based at the cathedral and the evening raised £94 for the charity.

Jacinta Goode is happy to come to your group or parish to speak. Please contact her on j.goode@medaille-trust.org.uk

Pictured above, Jacinta Goode of the Medaille Trust addresses her audience at St John’s Cathedral.