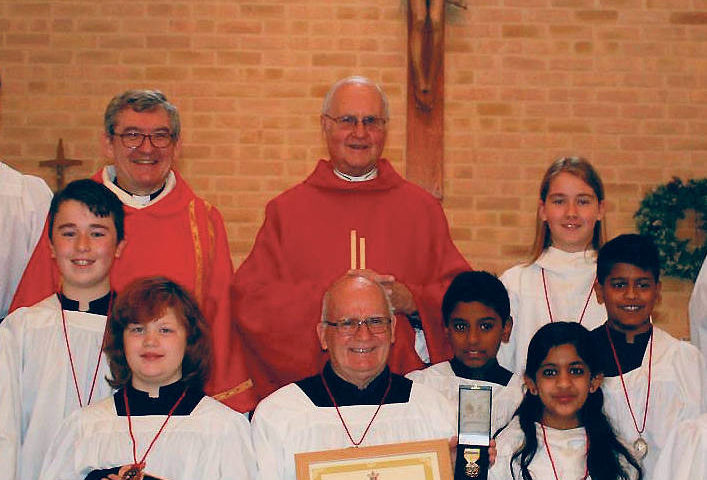 Fr Michael Teader was Suffolk born and bred. He spent his early years in Hundon, and apart from National Service in the RAF in Ely, he was to spend the rest of his life in Haverhill. After National Service, Michael worked in the Trustees Saving Bank, before training as a teacher. Here he found his vocation and an outlet for his abilities. Michael influenced generations of Haverhill people, as well as Newly Qualified Teachers whom he took under his wing.

As he was growing up in Hundon, the then Rector nurtured his Christian faith and made a lasting impression upon him. The parish was in the Anglo-Catholic tradition and this would ultimately lead Michael to the Catholic Church. As an Anglican and later as a Catholic, Michael had a firm and unwavering faith in God. His Christian vision was to inform and influence his life as a teacher, deacon and priest.

Michael took early retirement from his job as Deputy Headteacher of St Felix Primary School and then worked as a lay Catholic Chaplain in HMP Highpoint. At the same time he began his formation for the diaconate. He was ordained deacon in 1996. When his elderly father died, Bishop Peter Smith, the then Bishop of East Anglia, invited Michael to begin formation for the priesthood. Fr Michael was ordained priest in 2001 and was to spend the whole of his priestly ministry in Haverhill, until he had to stand down through ill health in November 2019.

Pope Francis has encouraged the Church to be bold and to go out to the periphery, to the edges. This is what Fr Michael was to do as teacher, deacon and priest. As a teacher he had a special concern for children whom others would deem difficult. His prison ministry bore great fruit. Seminarians were sent to him on pastoral placement and saw at first hand pastoral priesthood as it was lived.

He was responsible for the building of the new church in Haverhill. More important than the construction of a building was Fr Michael’s building up of the Catholic community in Haverhill so it became what it is today: a vibrant, outward-looking, multicultural community united in worship, service and witness. In the town, Fr Michael pioneered the St Nicholas’ Hospice Hub, which sought to take hospice chaplaincy out into the community. Fr Michael once said of his prison ministry that he sought to ‘open a window onto the love and mercy of God’. That characterised not only his prison work but the whole of his ministry as a deacon and priest.

Although on his own admission somewhat shy by nature, Michael had a natural capacity for friendship and he had a wide circle of friends. He was great company. Among his interests were gardening, reading, travel, music and art. His was a life well lived in friendship with God and others. May the Lord he so faithfully served bring him to the joy and life of Heaven.

Pictured above is Fr Michael Teader with altar servers at St Felix, Haverhill, in 2019.