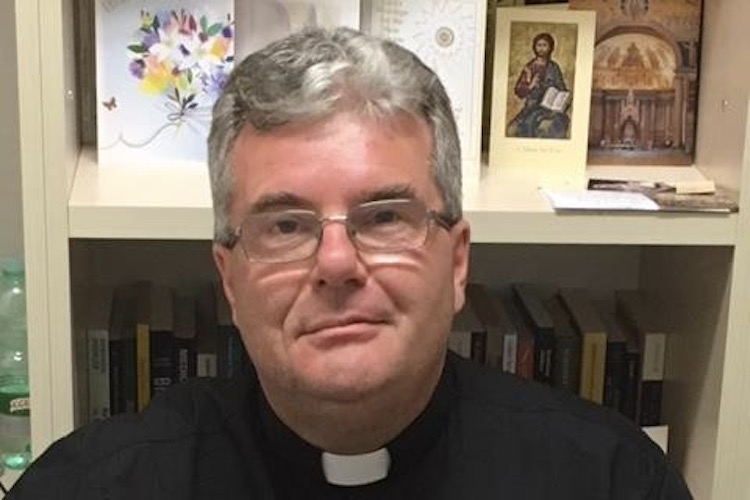 Fr Mike Brookes recently gave an interview on Radio Maria England about his work as a chaplain at the West Suffolk Hospital, and how it has changed in the face of the Covid pandemic.

Fr Mike is relatively recently ordained. Prior to that he was a nurse for 25 years, which gives him great empathy with staff and a developed understanding of the needs of patients and their loved ones.

He is also an assistant priest at St Edmunds parish in Bury St Edmunds. “Here in the Diocese of East Anglia you tend to be a bit of a generalist,” he said. “There are only half a dozen clergy who specialise in a chaplaincy.”

In normal times, he told listeners, the chaplain’s routine would consist of Mass in the hospital chapel and visiting people on the wards when a request had been made. He worked with a large number of volunteers, who were bringing communion and supporting patients and staff.

“The volunteers carried out their work with great energy and prayerfulness,” he said.

Since the Covid pandemic began, much has changed; Fr Mike only managed to fit in one Mass between lockdowns, and the role of volunteers is in abeyance. “It’s not a good idea to be inviting people into the hospital at the moment,” he said.

Fr Mike and the rest of the team are still on call for urgent admissions 24 hours a day. Much of his role, however, has moved to talking to people on the phone or through a tablet. There is, though, frequently a relaxing of rules – both for him and for families – when a patient is near death. If a dying patient is unconscious, he can offer an apostolic pardon rather than normal confession.

“It’s still a wonderfully powerful and providential ministry,” he said.

He is concerned that some people – including staff – are neglecting themselves because they take the view that others have it harder. “We have to allow people to be stressed and unhappy at the moment,” he said.

In the moments of drudgery, he said, “you just keep going and offer it up. I do what I have to do.”

All the same, he questions the way in which we all too often focus on the negative when we think of hospitals. “There is also great news in a hospital,” he pointed out, “the birth of a baby, and the salvation of so many people through the professionalism of the staff. People are being cured, hope is coming, and it’s wonderful to be part of that.”

You can listen to the full interview here under Padre’s hour.https://radiomariaengland.uk/1778-2/

Pictured above is Fr Mike Brookes