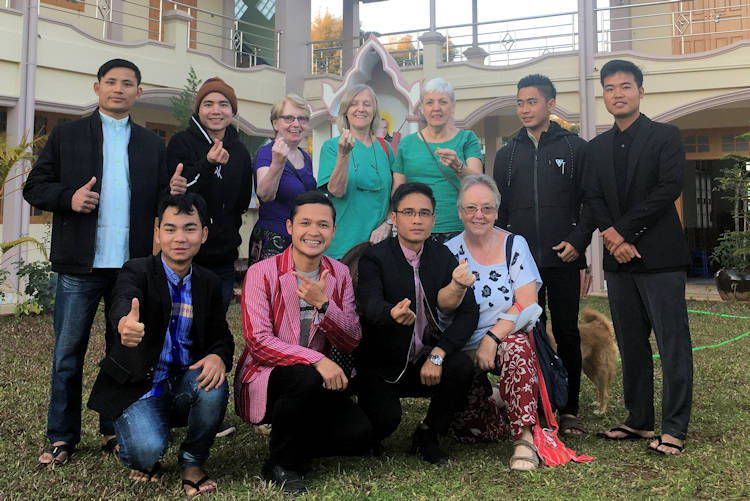 Ely Catholic parishioner Mary Durkacz says her “heart is broken” at news of the recent military coup in Myanmar where the educational charity which she founded has done much work. Mary writes…

The world is commenting on the Myanmar coup, the military’s refusal to let democratically elected officials form a government and their arrest and detention.  Some countries and organisations have been quick to condemn, some maintain that what happens within Myanmar is that country’s business.

As for me, my heart is broken.  I first went to Myanmar seven years ago in 2014. An acquaintance asked if I would go and teach and I said yes.  My father had been blinded (and his life saved) in Burma in WWII and I owed that country a visit.  Little did I think that that casual invitation would spark a compulsion and a passion, that I would fall in love with the place and its people.

I had been a teacher for nigh on 40 years and it was second nature to me.  Our 17 pupils that first time were young and shy and beautiful seminarians and pre-postulants.  Most had never spoken to a foreigner before.  Their education had been rudimentary, eroded by a militarist regime which preferred to direct public funds to weaponry and its generals’ pockets than to re-establishing what was once recognised as the finest education system in SE Asia.  One student showed me his university history syllabus for the year, a paperback full of distorted facts and polemic.  Learn these facts for your exam, he was told.

And so the following years were spent building relationships and, for a couple of weeks a year, taking materials and games and exercises to help our young learners to form their own opinions, make up their own minds, decide things for themselves and learn English, the language of commerce, which might just help them get a job.  By the second visit the one mobile phone owned by one student whose sister had sent it from Singapore, had expanded to every single student owning one or having access to one.  This meant online chatting, forming deeper friendships, sharing confidences and keeping in touch even when we left to go home.

I was so moved by seeing the flood damage late one year that my parish and others helped me raise a small amount of money for the Myanmar organisation we work through.  Fellow parishioners from St Etheldreda’s, Ely, and other friends wanted to help, to come with me and eventually Ahtutu – www.ahtutucharity.org.uk – was born and, with a lot of help and encouragement, became a UK registered charity with dedicated trustees and supportive benefactors.  We knew what we wanted – a charity where every penny went to the people we were supporting.

Our classes gained a reputation for hard work, fun and laughter – especially laughter.  Students came from many tribes, religions and persuasions. One of our trustees brought some of her students, kindly supported by Edinburgh Napier University, and that offered our Myanmar students friendships with other young people – a dream that relationships would endure through the years, long after Ahtutu is gone.

We closely supported a local orphanage and a rural village, continuing to help in any way we can. We made and took sustainable, washable feminine hygiene products to the women’s prison where we were told that the women sometimes used to have to use the stuffing in their mattresses if they could not afford to buy sanitary towels.

We showed a film, Burma Storybook, to a packed audience at the wonderful Shekinah Hotel, Pathein. On the screen we watched local dissident poet Maung Aung Pwint struggle through Parkinson’s Disease to talk about his prison ordeal in a tiny cell, which he paced out on the street, while his wife smiled just happy to have him there.  “Every seven years they came to take him.  We knew it would happen,” she smiled. We all wept with his daughter as she watched her father and mother on film for only the second time and told us that they had both died the previous year.  And when her husband gave us all a precious copy of his father-in-law’s poetry.  And when we gave her a copy of the DVD to keep.

So what happens to all of them now?  What happens to the poets and writers and artists who speak out now?  What about the church which has encouraged our visits and its local NGO which dispenses foreign aid? What about the clever young woman who asked if I would help her apply for a post-graduate degree abroad?  And the young man who asked for a reference to support his application to a foreign university?  And the young man who went abroad to train then came back to become a pro bono paralegal to support people who have been arrested? And the young people who are non-conformist and different?  And those who have formed their own opinions and ideas, those with aspirations and hope for a better future?  What of them now?

Because we know what happened before and it breaks my heart.

Read our previous article on this topic.

Pictured above are Mary Durkacz, Katie Betts and Joan Wall from St Etheldreda’s in Ely and Eileen Waterston from the Archdiocese of St Andrews and Edinburgh, with some of Ahtutu’s former students at Senior Seminary in Pyin Oo Lwin, Myanmar last January.