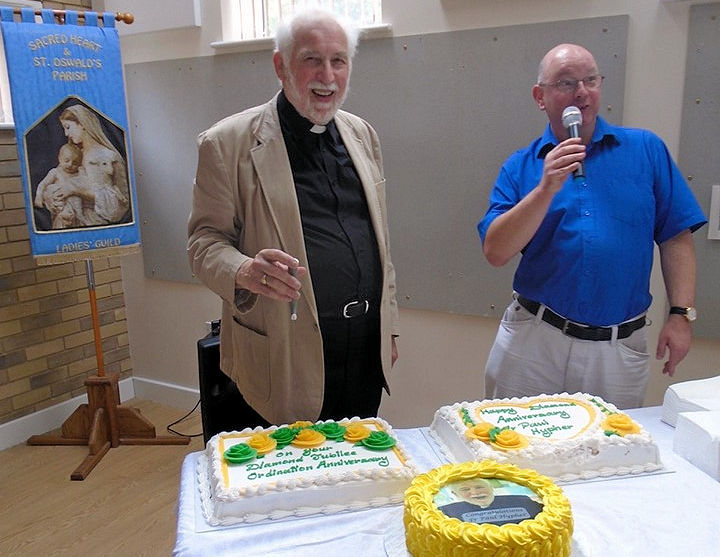 Fr Paul Hyper marked an impressive 60 years of priestly ministry with a celebratory Mass and party at the church of Sacred Heart and St Oswald in Peterborough on July 23. Timothy Fox reports.

Fr Paul was ordained on July 22, 1962, in St Ethelbert’s Church in Slough, by Bishop Leo Parker of Northampton, having been in seminary in Innsbruck for the previous six years.

He concelebrated alongside Parish Priest at St Oswald’s, Fr Seelan, with fellow priests and former parishioners, whom Fr Paul had served during his ministry within the diocese, present. Fr Paul gave grateful thanks to God for the graces for his vocation. He expressed sincere gratitude to the many people who supported him and shared faith with him during his 60 years of priestly ministry.  Preaching was Deacon John Morrill from Newmarket.

Fr Paul was ordained just before the Second Vatican Council and rejoiced at the many spiritual gifts that were brought into the Church through the Holy Spirit’s guidance of that Council.

Over six decades he served in numerous parishes in both Northampton Diocese and then East Anglia, including St Edward Kettering, St Mary Great Yarmouth, St Laurence Cambridge, Our Lady & the English Martyrs Cambridge and Our Lady Stowmarket.

For 16 years Fr Paul was parish priest at St Peter and All Souls, Peterborough, including also covering St Oswald’s and Our Lady of Lourdes for six years after the incumbent priests died in post.

Following that, in 1993, Fr Paul moved to St Benet’s Beccles and then in 1994 to St Etheldreda’s Newmarket, where he remained until October 2003 when he retired due to poor health and moved to Bentham in North Yorkshire.

Fr Paul was also Schools Commissioner for Peterborough and then for the whole of Cambridgeshire during which time the inter-church schools in March and St Bede’s Secondary Inter-Church School in Cambridge were established.

During the jubilee Mass, Fr Paul (now aged 83) and his fellow celebrants renewed their dedication to serve Christ as priests of his new covenant and to unite themselves more closely to Christ, joyfully sacrificing their own pleasure so as to bring peace and love to their brothers and sisters. They resolved to celebrate the Eucharist with sincere devotion and to teach the Christian faith without thinking of their own profit.

Lay people too had a share in the Lord’s priesthood, given at baptism and confirmation. Alongside Fr Paul and his concelebrants, they reiterated their commitment to exercise that priesthood in the service of the Church.

After Mass, the congregation enjoyed a sumptuous buffet laid on by the parishioners of Sacred Heart and St Oswald in Fr Paul’s honour. Alongside a vast array of savoury and sweet delicacies, no fewer than three large celebratory cakes, iced and inscribed, were cut by him and distributed to the happy guests assembled in the hall and outside in the warm July sunshine.

Pictured above is Fr Paul Hypher with his jubilee cakes in Peterborough.