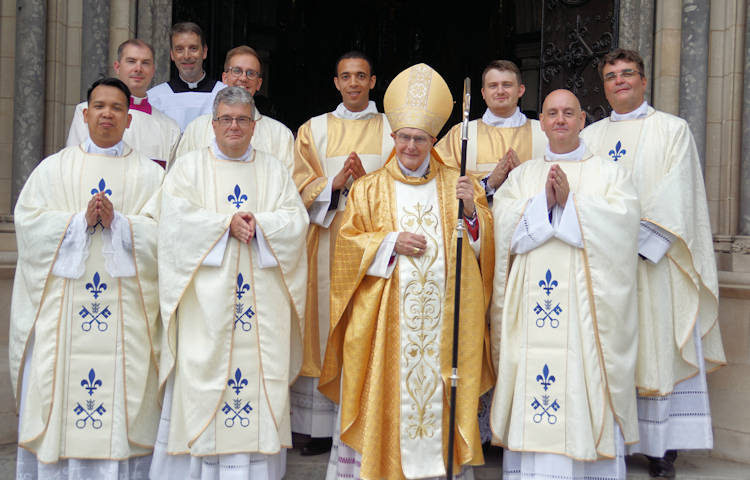 An event almost unprecedented in the 43-year history of the Diocese of East Anglia took place on Saturday July 6 in St John’s Cathedral, Norwich, when five men were ordained as priests on a single day. Keith Morris reports. 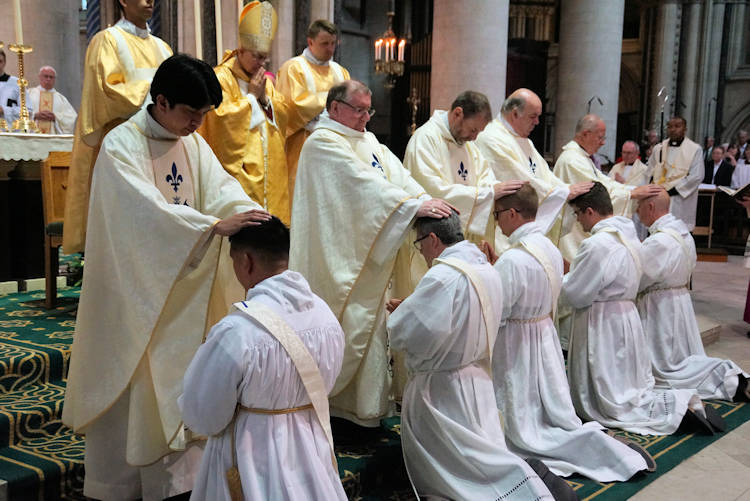 The Mass of Ordination to the Sacred Priesthood took place in front of a packed congregation of over 1,400 people, including around 120 clergy from across the Diocese and beyond, with every seat taken and some standing as well. Never have five men been ordained as priests in a single day in the history of the diocese.

The only previous time in the 43-year history of the diocese when more men have been ordained on the same day was in September 1996 when seven former Anglicans joined the Catholic priesthood.

Alfonso-Jude Belnas, Michael Brookes, Simon Davies, Alan Hodgson and Paul Spellman were ordained following studies of up to six years in length at seminaries in Birmingham (Oscott), Surrey (Wonersh) and Rome (Beda College), which were each represented by senior clergy at the Mass.

In his homily, Bishop Alan Hopes, said: “May the power of this Sacrament of Ordination lift us up today into the realms of eternity. Pray for our brothers, Jude, Michael, Simon, Alan and Paul that they may always remain close to Jesus Christ, our great High Priest. Pray that their lives and ministry may be filled anew with the Holy Spirit so that they may become powerful icons of the Lord’s love and mercy to the Church and to the world.

“Out of the priestly people of God, Jesus Christ, our great High Priest, chooses men and sets them apart to serve God’s people in his name as ordained priests. This is a truly noble calling,” said Bishop Alan.

Alan Hodgson, born in Cape Town, South Africa, is a former aircraft fitter and Operations Manager at Gatwick Airport. One evening, he was involved in a traumatic event on the way home from work which led him to really take stock of my life and begin a search to fill the gap.

“I found solace in front of the Blessed Sacrament and it was there that I realised that the call to priesthood, which I had buried for so long, was still there and yelling to get out,” said Alan.

Alan trained at the Beda College in Rome and has been appointed as an Assistant Priest of St Mary, Ipswich.

Michael Brookes, from Dereham, was raised in an Anglican family and, after university, followed a career in psychiatric nursing. He was received into the Catholic Church in 1991 and later spent several years with a religious order before discerning that his future did not lie there. 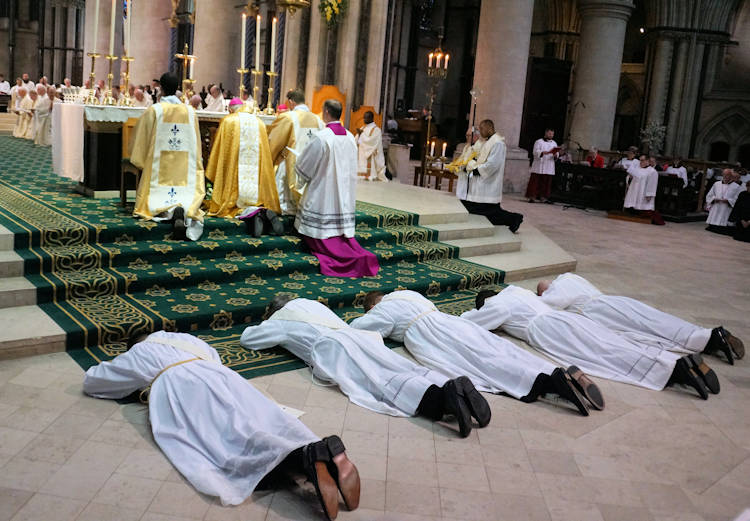 “After leaving I felt a strong sense that God was guiding me towards the discernment of diocesan priesthood, a vocation which I had not previously considered,” said Michael.

For the last four years Michael’s time has been split between St Mark’s Ipswich and the Beda College, in Rome and he has now been appointed as Assistant Priest of St Edmunds, Bury.

Paul Spellman, from Sheringham, said: “My time at the Pontifical Beda College has been one of immense personal growth. One that has required me to listen more closely, like Elijah was asked to do, to the whisper of God’s voice and to bend my ear to hear what it is God is asking of me.

“Living in community has helped me to see the richness and value that it offers both to the individual as well as the group as a whole.  My experience on pastoral placement in Palestine last summer further challenged that sense of community, especially in light of the daily experience the Palestinian people I was with have,” he said.

Paul has been appointed as Assistant Priest of Our Lady and the English Martyrs, Cambridge.

Alfonso-Jude Belnas is from the Philippines, with strong links now to St Philip Howard, Cambridge. He trained at St Mary’s Seminary, Oscott (Birmingham).

“My vocation has always been an experience of trusting and accepting the will of God and viewing him as a Good Shepherd,” said Jude. “I came from a humble family with an extended family that gave me security, good moral guidance and the faith that I have now.

“Events, including my father’s death in June 2016, tested my trust and became the foundation of my discernment to the priesthood. I was able to identify my failings and I was able to measure how trusting I was in God.”

Jude has been appointed as Assistant Priest of St Luke, Peterborough.

Simon Davies was born in Cyprus, where his father was stationed in the RAF, moving to St Neots in the 1990s. He served at Mass as a teenager and studied History and Politics at the University of East Anglia in Norwich, and served at both the student chaplaincy and St John’s Cathedral.

On completing university in 2009, he went to Oscott seminary for three years, where he studied for the priesthood and gained a Theology degree

He then took a break from study and went to do pastoral work in Haverhill, working at St Felix’s Primary School as a teaching assistant and also in the Chaplaincy at Highpoint Prison.

While working, he contemplated his vocation and explored several religious communities including the Norbertine community in Chelmsford and the Oratorian community in Oxford where he studied for 18 months.

In September 2017 Simon recommencing his studies at Wonersh Seminary in Surrey after being accepted by the Diocese to train as a priest.

Simon has been appointed as Assistant Priest of St John the Baptist Cathedral, Norwich.

To see a full picture gallery of the ordination Mass, click here or see below. All pictures are free to download and use with a credit to Keith Morris/www.rcdea.org.uk