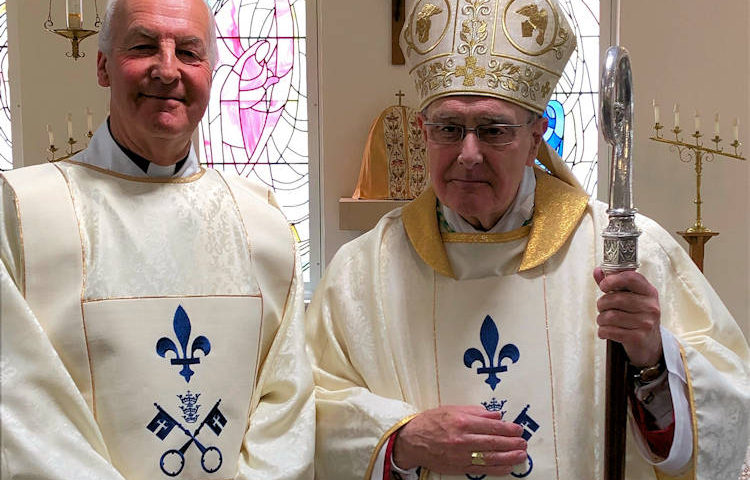 Former Anglican minister Richard Ireson was ordained as a Deacon at Our Lady of The Annunciation, Poringland on May 29, the Eve of The Solemnity of The Ascension. Here is his vocation story.

Richard (aged 73) is a retired Anglican minister who after training as a teacher, entered and served in Anglican orders for 40 years.

Training at Lincoln Theological College and specialising in rural groups and teams of parishes, he served in a variety of market towns including Grantham, Boston and Alford; in his last posting being responsible for ten villages and forming an effective pastoral team.

Married to Janet, a teacher and with three daughters and three grandchildren life has been busy and full on the domestic front as well as following my vocation, says Richard.

“I have been blessed in my life by having a wonderful Christian family and raised in a community where the faith was taught by believers. I was taken by our faithful Anglo Catholic parish priest to the Shrine of Our Lady of Walsingham at an early stage and introduced to regular disciplines such as daily Morning and Evening Prayer and confession.

Richard was educated at Nottingham High School, a pre Reformation charity foundation, by committed Christian teachers and in an open Christian ethos.

In his early teens, with the support of a convent educated grandmother and regular visits to family connections in Brussels, Richard became aware of the Worldwide Catholic Church, the Rock of Peter.

“My pilgrim path has been a long one, but I can only say that the joy and sense of arriving home at last, when I was received into the Church before the Easter Vigil at Ampleforth, Easter 2012, was a supreme moment in my life,” said Richard.

“My reason for leaving the Anglican Church was chiefly the lack of true authority and a yearning to be in Communion with the Bishop of Rome. Bl John Henry Newman, Ampleforth, Belmont Abbey and Mount St Bernard’s Abbey have been inspirations in the last seven years as a Catholic and together with the gracious concern and guidance of Bishop Alan the discernment process has been positive and fulfilling.

“I emphasise however, that I offered myself to Our Lord first and foremost and if the resulting outcome had been otherwise I would have accepted it without question,” said Richard.

“I now place myself entirely in His hands; His grace will be sufficient for this very weak vessel.”

Pictured above is Rev Richard Ireson with Bishop Alan after his ordination to the diaconate.