Year of Mercy ends as Holy Door closes in Norwich 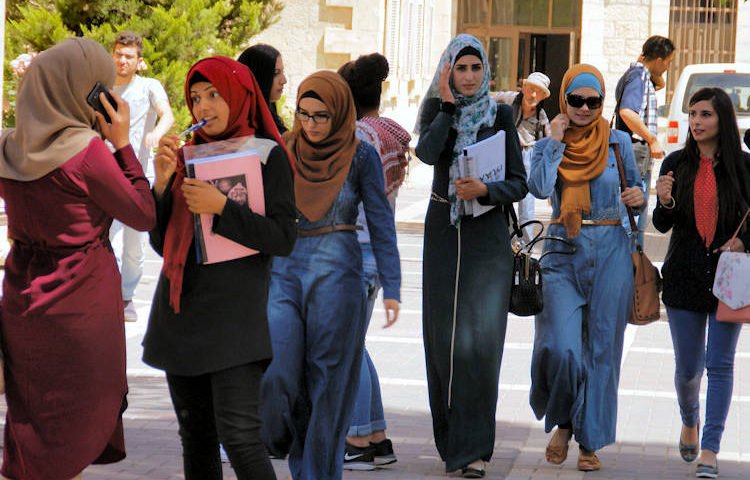 Pilgrimage People is a tour company with a difference ' its raison d'etre is to build relationships between people of faith in the UK and those in the Holy Land, as Keith Morris discovered when he joined a recent fact-finding trip to Palestine.

Tens of thousands of pilgrims and tourists from the UK will visit the Holy Land this year to see the land where Jesus was born, grew up, went about his ministry, was crucified and rose again. They will want to visit Biblical places such as Jerusalem, Bethlehem, Nazareth, the Sea of Galilee and the Mount of Olives and walk where Jesus walked.

But exploring the Holy Land on an organised tour, what most visitors will often not see is the often harsh reality of living in Palestine today ' a land splintered by complex religious and ethnic differences.

We often read in the news of a land split by strife between a six million-strong nation of Jews living on one side of the concrete walls and barbed wire and a six million nation of largely Muslim Palestinians living on the other.

Despite being the birthplace of Jesus Christ, today the local Christian population of the Holy Land is very small, less than two percent in fact, but it still plays a key role, often providing a means of mediation through local priests or social support through hospitals, orphanages and schools.

The Diocese of East Anglia has a long-established relationship with the Latin Patriarchate of Jerusalem, with which it is twinned. This has developed today into the associated charitable pilgrimage company – Pilgrimage People.

Since its formation some 16 years ago, largely through the passion and vision of March priest Fr Paul Maddison, the not-for-profit charity has enabled thousands of pilgrims, many from the Diocese of East Anglia, to visit the Holy Land and enabled direct links with some 20 East Anglian parishes. It has also contributed no less than £600,000 to development projects across the Holy Land, mostly in Palestine, including funds raised by pilgrims themselves.

I was invited to join a fact-finding trip by Fr Paul, along with the charity's trustees Graham Snudden and Margaret Camp, tour administrator Liz Pugh and Anglican priest, and former Dean of St George's College in Jerusalem, Rev Stephen Need.

As my first trip to Israel and Palestine, it was a bit of an eye-opener. We arrived at Tel Aviv airport after a five-hour flight from Luton on Easyjet (on which we were offered the chance to have a prayer meeting at the back of the plane ' for Orthodox Jews). On the way to Bethlehem, there was an extra road-block by the Israeli military which delayed us a bit.

For Palestinians, and visitors who want to cross from Bethlehem to Jerusalem either side of the separation wall, there are daily security checkpoints which range from inconvenient to disruptive, depending upon the mood of the invariably very young Israeli soldiers on duty. But with Pilgrimage People you travel as guests of the local community which means you actually feel very secure.

We were there to visit half a dozen development projects which Pilgrimage People has been supported over the last decade.

Based at the comfortable and modern Christian family-run Angel Hotel in Bethlehem, we hopped on and off our minibus to meet dedicated Catholic parish priests in small West Bank villages who are obviously right at the centre of the community, running schools, old people's homes and youth projects, as well as their churches. 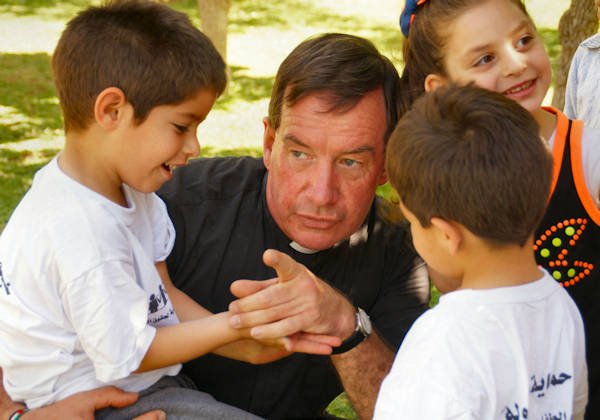 Fr Firas Aridah, in Jifna, runs summer community evenings in an outdoor playground which attract up to 400 people a night and Fr Johnny abu Khalil, in Taybeh, is planning a new youth centre as there are simply no facilities in the village for young people ' apart from his own front room which is filled by teenagers every night.

We visited an Orthodox Kindergarten in the Old City of East Jerusalem, which also runs women's empowerment projects and extra tuition for schools students ' in pretty cramped conditions – with a small astro-turf playground on its roof.

We were privileged to drop in at the headquarters of the Latin Patriarchate where we had an audience with Bishop William Shomali, Patriarchal Vicar for Jerusalem. He presented Fr Paul and the trustees with an honorary medal in recognition of their donations in support of the Patriarchate's development projects.

We also met Henrique Abreu ' Head of the Project Development Office ' a former senior manager with the Marriott Hotels group, to hear about some Patriarchate projects that Pilgrimage People are already supporting. These include refitting a kitchen at an old people's home in Taybeh, a community playground and garden project in Jifna and funding to refurbish the project development office at the Patriarchate itself.

Pilgrimage People are looking to widen their tours involving Anglican and other denominational groups and to this end we visited St George's Anglican Cathedral in Jerusalem where we met an enthusiastic Rev David Longe ' Bishop's Chaplain ' who was keen to work more closely together to the benefit of Anglican humanitarian projects across the Holy Land.

Rev Longe made a key point: "The beauty of ecumenical partnerships is that we stand united to sustain the precious and precarious Christian presence in the Holy Land. Developing links for visiting pilgrimage groups to parishes in the Holy Land are ones of reciprocity at a deep spiritual level ' both sides learning from each other ' if they are just about cash they will fail."

One of the most heart-breaking stops on our visit was to the Holy Family Orphanage in Bethlehem, run by the Sisters of St Vincent de Paul. As well as offering a refuge for abandoned babies ' one was just left on the doorstep the day before we arrived – and children, the cr£che engages in early years' education and provides outreach into many of the villages for both mothers and babies. It is the only institution of its kind in the whole of the West Bank.

One of the most inspiring visits was to Bethlehem University, the first such establishment on the West Bank and the only Catholic-led one. Many Pilgrimage People groups pay a visit.

We met some delightful, eloquent, students of whom, as a whole, 75% are female and 70% Muslim. They told us of the hope their studies gave them for the future and the difficulties they sometimes faced pursuing their studies in an occupied territory with its restrictions on movement and financial constraints.

Vice Chancellor, Br Peter Bray, told us: "Our aim is to keep hope alive. The hope that what we are going through, we are not going through alone. We welcome people visiting us because it means that they are standing in solidarity with us and our students are being listened to. When I see the young people's energy, then I can put up with all the stuff that is going on around us.

"We are an unashamedly Catholic university and, like Jesus, we are here to help provide opportunities for people to live life in all its fullness."

Next stop was the Bethlehem Arab Society for Rehabilitation hospital in Beit Jala, a former Cheshire Home and now a thriving surgical and rehabilitation hospital with a first class reputation in Palestine. Pilgrimage People has funded a paediatric intensive care bed and we met little Sara, the first patient to use it, and her mother. Sara has been diagnosed with cerebral palsy and the hospital is providing intensive daily rehabilitation.

General Director, Edmund Shehadeh, told us: "We are destroying walls and building bridges for the future. I open my doors to everybody. As long as God helps me, I will continue."

I managed to slip off our scheduled tour just once, while we were in the Old City in Jerusalem, to pay a visit to the Church of the Holy Sepulchre, the site of both the crucifixion of Jesus and his tomb ' a captivating and intensely spiritual location and a must-see for any Christian visitor to the Holy Land.

On our last evening, we went to Vespers at the Latin Patriarchal Seminary in Bethlehem and enjoyed dinner with the seminarians, talking about faith, falafal and football. 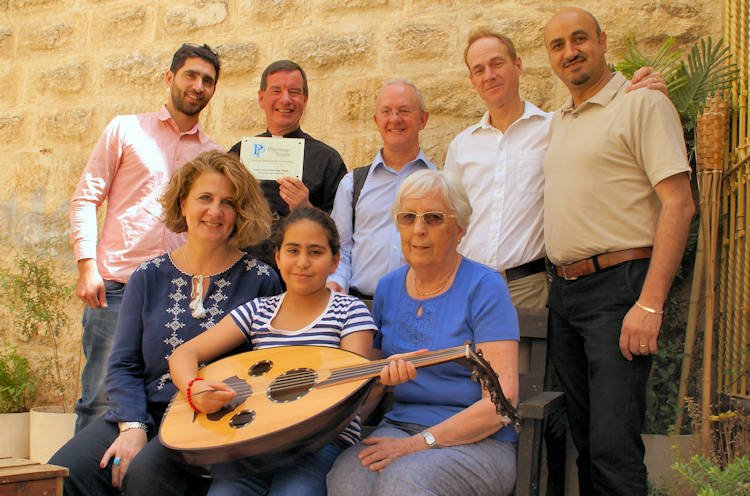 Our final stop, on the way back to the airport, was at the Palestinian Centre for Rapprochement Between People where Pilgrimage People has been helping to fund the Tunes for Peace project. Over the last two years 70 young people have learnt to play musical instruments here.

Director, George Rishmawi, told us: "I believe in what music can do for a person ' it can give them an inner calm and, for some, the chance for a future career."

It is a great example of a point made to me by trustees Graham Snudden: "For me the key point is that the historical stones of the Holy Land provide context but it is the living stones who teach us so much more about the practical messages of the Gospel and how they can be applied today."

So ended an inspiring five days, meeting extra-ordinary Palestinians, engaged in life-changing projects and offering an alternative view of life in the country to the one we often hear in the media.

And many of the projects made possible thanks to funds generated from pilgrims from the Diocese of East Anglia/Pilgrimage People.

I for one will definitely be back.

Pilgrimage People is an ATOL registered tour organiser, a trading name of ACE Cultural Tours and is based in offices near to Cambridge in the UK. They offer tailored pilgrimage tours not only to the Holy Land, but also to Turkey, Spain, Italy, France and Poland with all surplus income going to support humanitarian projects in the Holy Land which are Christian-led but benefit the wider community regardless of faith or nationality. To organise your pilgrimage and leave a lasting legacy as a result of your visit, contact Pilgrimage People on 0800 6123423, info@pilgrimagepeople.org or visit: www.pilgrimagepeople.org

Pictured top, Bethlehem University, middle, the Holy Family Orphanage in Bethlehem and, above, the Tunes for Peace project.