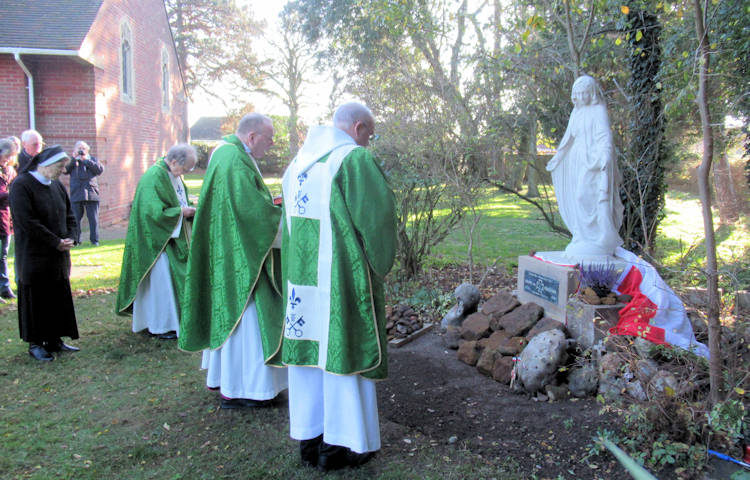 A shrine to Our Lady in Hunstanton in North West Norfolk has been restored and consecrated in memory of Polish troops who helped defend the county from the threat of invasion during the Second World War.

When The Church of Our Lady and St Edmund in Hunstanton was built in 1905, it was no larger than a Lady Chapel and could only seat a few people.

In 1940, a unit of Polish soldiers came to Britain to man an armoured train that protected the coast as far as King’s Lynn and were billeted at nearby Heacham.

The church was far too inadequate for their numbers and so the soldiers built a shrine and an altar in the church garden, where Masses were held in the open-air.  Three years later their unit was relocated to Brancaster and other areas around the coast.

After the war, American troops still stationed in Norfolk funded and built an extension to the church during the 1950s, but sadly the shrine and altar were demolished.

This year, a Polish lady parishioner, Asia Hutchinson, with the support of the Polish and parish communities, decided to rebuild the shrine in the grounds of Our Lady and St. Edmund’s Church to commemorate all the troops who had fought in the war.

She found a firm of stonemasons on-line at Komorow, Poland, called “Chronos Figury”, and because they were Catholics, they were very sympathetic to the cause.

She commissioned them to hand-carve a beautiful white statue of Our Lady out of sandstone and lime, and as it weighed 240 kilogrammes, it required a strong team from Kuki Transport, King’s Lynn, to load it on to a lorry and bring it all the way from Poland.

On Sunday November 18, the shrine was consecrated by Canon Peter Rollings.  Many thanks go to all the volunteers who gave their ready support throughout.

Pictured above, the shrine being consecrated by Canon Peter Rollings. Picture by Chris Hutchinson.