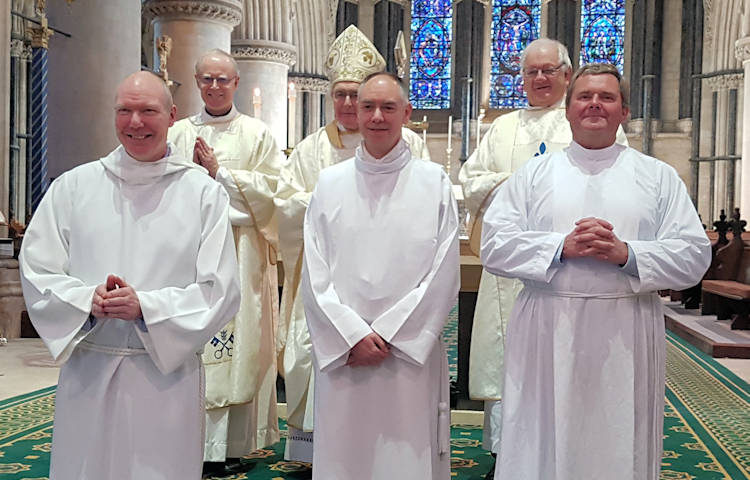 Three candidates to the diaconate were instituted as acolytes at St John’s Cathedral in Norwich on November 3, reports Rev John Morrill, assistant director for the permanent deacons.

Brett Gladden from Bury St Edmunds, Martin L’Estrange from King’s Lynn and James Hurst from Newmarket (pictured above front row) reached a final staging post on their four-year formation journey following ‘candidacy’ in their second year and ‘lectorship’ in their third year.

Bishop Alan (flanked by Deacons John Bell and John Morrill) instituted them as acolytes at a Mass attended by many members of their families in the Cathedral.

In his homily Bishop Alan reminded them of the three-fold ministry of deacons, as servants of the book, of the altar and of all in need.

Their service as acolytes emphasises their role as servants of the altar, assisting the Bishop and priests at the eucharist, and Bishop Alan strongly encouraged them to meditate deeply not only on the scriptural texts about the eucharist and on the teachings of the Vatican Council and of recent popes, but also by exploring the riches of the teachings of the Fathers of the Church in the early centuries.

In addition to Brett, Martin and James, there are three other men in formation at present for the permanent diaconate. It is hoped that they will join a college of deacons consisting of 37 men, but a majority of these have reached the age of 75 and are fully or semi-retired.

Those in formation are formed at St John’s Seminary at Wonersh near Guildford alongside about 40 other men from the dioceses of Westminster, Southwark, Northampton, Brentwood, Arundel and Brighton and the Ordinariate.

Formation takes four forms – intellectual (all gain a foundation degree in Pastoral Theology), personal, pastoral and spiritual. Brett, Martin and James are all married men, and are supported by their wives, and their wives are encouraged to participate (or not) in the formation programme.

If all goes well, it is hoped that they will all be ordained as permanent deacons in the Cathedral on June 22 next year (the Feast of St John Fisher and St Thomas More).