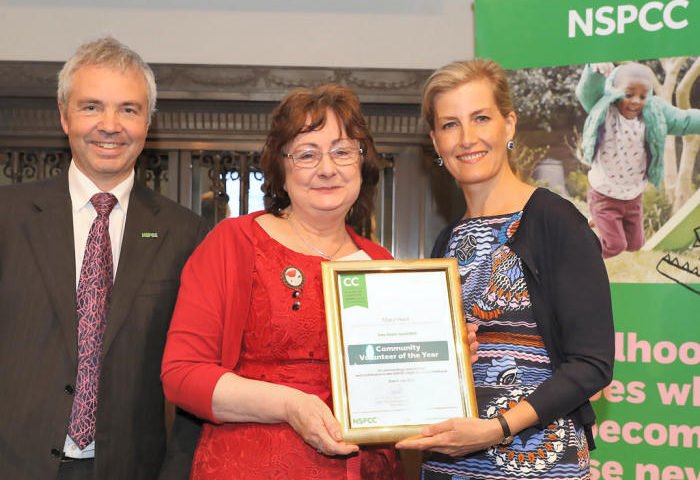 Retired teacher and Minister of the Word at the Catholic Parish in Lowestoft, Mary Hunt, has been named National Childhood Champion Community Volunteer by the NSPCC for her 26 years of service to the charity.

The honour was announced at the charity's first ever Childhood Champion Awards lunch at the Banking Hall in London. Winners were presented with their awards by NSPCC President, HRH the Countess of Wessex alongside ChildLine founder Dame Esther Rantzen and NSPCC Chief Executive Peter Wanless.

All the nominees were recommended by fellow NSPCC volunteers and staff across the country.

Margaret Macer, Vice Chair of the Lowestoft District Committee, who nominated Mary, said: "Mary has contributed enormously to the success of the NSPCC fundraising, awareness of the charity's work and help for young people in the Lowestoft area. As a member of the Lowestoft committee for 26 years she has, with her drive, initiative and organising ability, inspired the rest of our group to hold events beyond our normal scope. These include a theatre production as a Father's day tea event involving a cast of 80 teenagers and young musicians and cine club morning. Her involvement in the local community extends to work with churches together and running a mother and toddler group.

Mary said: "At the lunch I felt overwhelmed and humbled to be chosen as the National Winner for the Community Volunteer category. I am delighted to receive this award and I hope others will volunteer too to raise vital funds to help protect our children from abuse, neglect and cruelty which is sadly still going on today."

Mary, who lives in Oulton Broad, is a children's catechist at the Parish of Our Lady Star of the Sea Lowestoft where she also helps prepare children for First Holy Communion. At St Nicholas Church she is a Minister of the Word.

Mary retired after a 40-year career teaching French, as a department head in secondary and middle schools and as a Key Practitioner in Primary Languages.

She is secretary to the Diocese of East Anglia Commission for Dialogue and Unity, secretary for Christians Together in Lowestoft and a founder member of the Stella Maris Parent and Toddler Group which she still runs today.

"I enjoy being with children of all ages and delight in seeing them develop into their full potential, whatever that should be," said Mary. "Every child does matter to us all. Jesus said to us "Love one another as I have loved you'."

The NSPCC winners were selected by a judging panel that included Dame Esther Rantzen, NSPCC CEO Peter Wanless and Derren Heyes who is editor of Children and Young People Now and presented on July 6.

Dame Esther Rantzen said: "One of the most enjoyable tasks I have ever been asked to undertake was to read the nominations for our volunteer champions. I was hugely impressed and inspired by all of them. ChildLine and the NSPCC would not exist without them. The children they have helped would love to be able to thank them personally. I am delighted to have the opportunity to express my deep gratitude, on their behalf."

Peter Wanless, CEO of NSPCC said: "Our Childhood Champion Awards are our chance to say thank you to some of our most dedicated volunteers. Their efforts really are outstanding and we would not be organisation we are today without them. A huge well done to all those who were nominated and won today and a big thanks to all of our volunteers."

You can hear Mary live on Radio Suffolk at 2.10pm on Thursday July 14 talking about the award.

Pictured above is Mary Hunt receiving her award from Pete Wanless andHRH the Countess of Wessex.