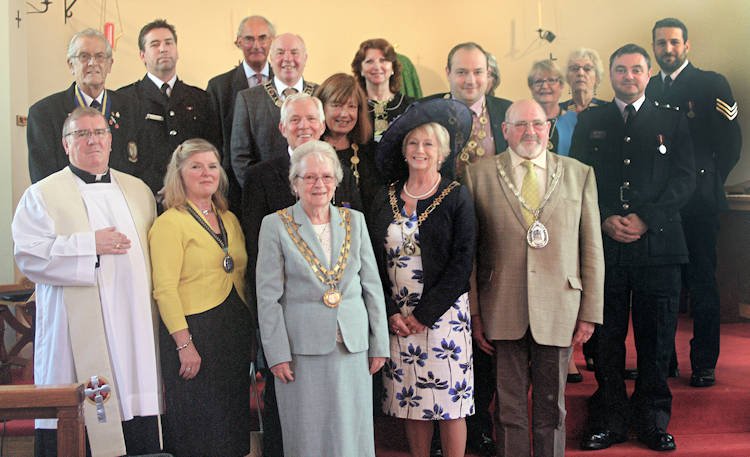 New Dereham Town mayor, Cllr Hilary Bushell, has been welcomed into the post for an historic second consecutive time at a civic service held at her home church, the Catholic Sacred Heart and St Margaret Mary in the town.

It is the second year running in which Hilary, aged 73, has been elected as mayor, a first for Dereham, and is only the third time the civic service has been held in a Catholic church – the second was last year.

The civic service, attended by mayors and civic dignitaries from across Norfolk, was led by parish priest Fr Brendan Moffatt on Sunday October 21, who knows Hilary well, as a long-time member of his congregation.

Hilary, who was adopted at three months old, was brought up within the Anglican church. She became a Catholic at the age of 21 “as the church seemed to enclose me within its arms,” she said.

“Most of my life was involved in working in finance and I finished as a financial director of a Norwich company. Since retiring I worked firstly as a volunteer, and later as a full-time member of staff at the RC National Shrine at Walsingham for a period of four years, where I was also a reader and a Minister of the Holy Eucharist.

“I only became a councillor at the age of 69 and have learnt so much and enjoyed every aspect of my work. It is a voluntary post and important as I am able to give something back to the town that became my home 44 years ago.

“I never dreamt that I would ever become mayor once let alone be re-elected for an immediate second term,” she said. I am still full of energy and enjoying meeting so many people.

“My faith is very important to me and enables me to continue to be able to meet and help so many people in all different ways. It has been a great chance to work with the churches together.

“I have received so many positive comments about the church. Even non-church goers say that the ambience is warm and encompassing. In fact one of the mayors from last year said that he wanted to come back to our church because he loved it so much. Of course the service has only been possible with the help and support of Fr Brendan.”

Fr Brendan said: “It was a great joy and privilege for me to lead the Civic Service for Hilary and the Town Council on two consecutive occasion. The joy and privilege was to see so many people who are involved in civic life, who give of their time and talents in service, gathered for worship in our church. We sang hymns, we prayed, the Mayor read the Declaration she made on taking office, we listened to Scripture and we invoked God’s blessing on those who serve the community in so many ways.

“It was also wonderful to welcome the mayors of so many local councils, compete with chains of office and to feel that we are also part of the wider communities in the area,” he said.

Pictured above is Dereham Mayor Cllr Hilary Bushell with other dignitaries at her civic welcome service at Sacred Heart and St Margaret Mary. Picture by Jenny Bailey.