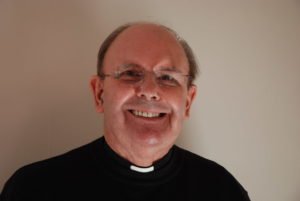 Deacon John Steel from Ely has died, aged 75, after bravely fighting cancer for a number of years and his funeral will take place at St Etheldreda in the city on Wednesday October 31.

Parish priest Fr Tony Shryane said: “St Etheldreda’s is sad to announce the death of our wonderful deacon, John Steel, on Thursday October 18.  Deacon John supported many projects and people in the parish and will be sadly missed. Our thoughts and prayers go to Margaret and all of John’s family.”

John originated from Easington Colliery in County Durham, born on March 14, 1943, and had a variety of managerial jobs throughout his life including as Managing Director of Stagecoach Cambus Holdings Ltd.

He was married to Margaret in 1964 and leaves her, two sons, John and Michael, and five grandchildren, four boys and a girl.

John was ordained a Deacon in East Anglia in 1996 and then went to the Diocese of Middlesbrough, where he was incardinated.  He worked in Yarm Parish, St Mary and Romuald, and also in Thirsk Parish under a number of priests, in particular Canon Alan Sheridan and Fr James Blenkinsop.  From his management experience, John also was asked to work in the Curia office and became the Diocesan Safeguarding Co-ordinator for some years.

John retired in 2014 and decided, with Margaret, to move to Cambridgeshire.  He sadly had cancer and was treated with chemotherapy.  He also recently contracted pneumonia and pleurisy.

John’s body will be brought into the church of St Etheldreda in Ely on Tuesday October 30 at 7pm which will be followed by Mass.

The Funeral Mass will be celebrated at 12.30pm on Wednesday October 31 at 12.30pm followed by cremation.

May he rest in peace.