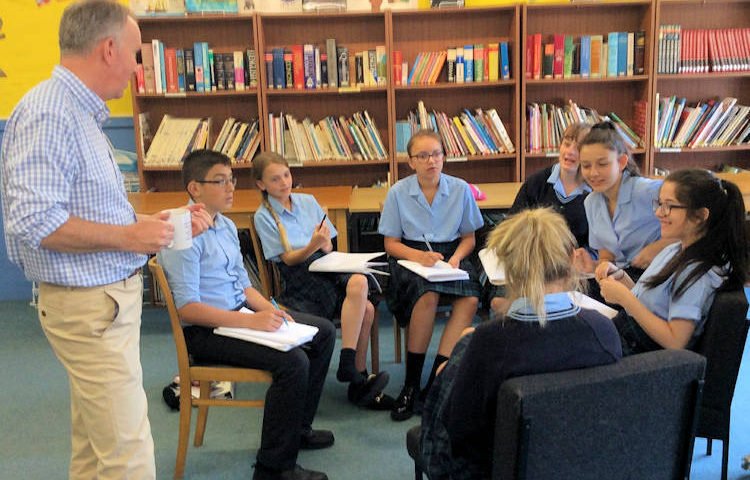 For three days the pupils at the Sacred Heart School in Swaffham were released from their normal timetable to take part in a literary extravaganza, reports organiser Sally Gooderson.

Staff, past and present, had worked hard to transform the school hall into themed bays (eg Victorian, Wildlife, Biggles, Exploration) to accommodate literary workshops from June 27 to 29.

Storyteller, Paul Jackson, captivated all ages with his tales of wonder and use of cultural instruments, with some pupils attempting to produce sound from his didgeridoo;  Dr Sue Gattuso of Swaffham Museum enthralled them with the history of comics and annuals and the story of The Pedlar of Swaffham;  illustrator and author Peter Kavanagh encouraged pupils – and staff – to access their imagination and create cartoon characters whilst two creative writers from the University of East Anglia encouraged older pupils to write short imaginative pieces of writing.

As well as introducing her books, author and designer Mandy Stanley took the children through the process of producing a book and this was complimented by a former pupil, natural history writer and publisher Sarah Whittley, who brought in proofs of her new book straight from the press.

Some groups even had the opportunity work with James McCullough, from EWTN TV company, to script write and present a short video production which could be used on the school website. And all of this was backed up by YouTube clips provided by American author Natasha Friend and James Johnson, script and podcast writer.

Three classes visited the Swaffham library and the next day one young lad came running up and excitedly regaled staff with the fact that his grandmother had promised to take him again, another asked if we will be doing this again next year! Surely an indication of how successful the whole event was.

Pictured above are Sacred Heart pupils script writing with the help of James McCullough from EWTN TV.