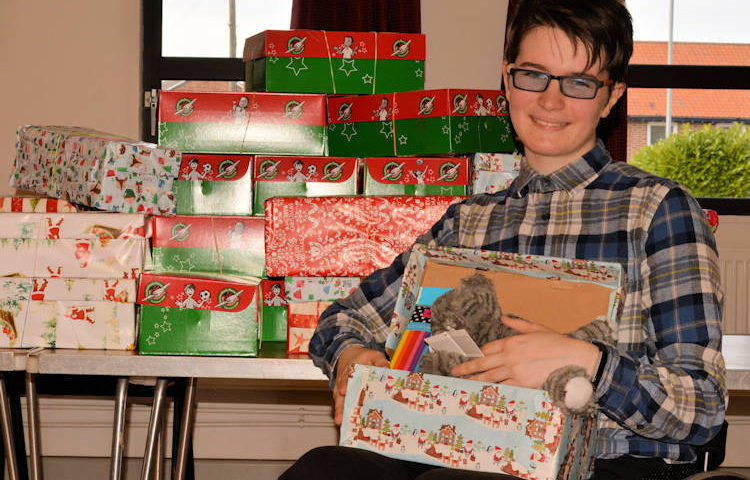 A Norwich teenager has galvanised his church, St George’s on Sprowston Road, to fill over 40 shoeboxes full of gifts for disadvantaged children around the world.

Jamie decided that this could take the form of a packing party after Sunday morning Mass alongside a shared lunch.   After discussing the idea with Fr Sean Connolly  a plan was formulated to gather gifts and pledges of gifts over the six weeks running up to the event on November 4 with a provisional target of filling 20 shoeboxes.

Gifts include toys, games, school items and some toiletries, including something useful, something fun, a ‘wow’ item and something to love.  There was a sign-up sheet in the church porch and Jamie was available after Mass most weeks to chat to people about the event.

Jamie’s father, Tony, said: “On the day, there was a very generous response, the gifts covered several large tables and over 30 parishioners took part.  After a short introduction Jamie showed two short videos about Operation Christmas Child before packing began.  Everyone enjoyed the joy of giving and a very happy atmosphere filled the hall.

“Such was the positive response that two parishioners dashed home to collect extra shoeboxes and at the end of the event we had packed 41 boxes and several folk took some ‘left-overs’ home to fill additional boxes.   A successful event on every front and Jamie already has plans for next year.”

Operation Christmas Child is a project of Samaritan’s Purse.

Pictured above is Jamie Goode with some of the packed shoebox gifts.