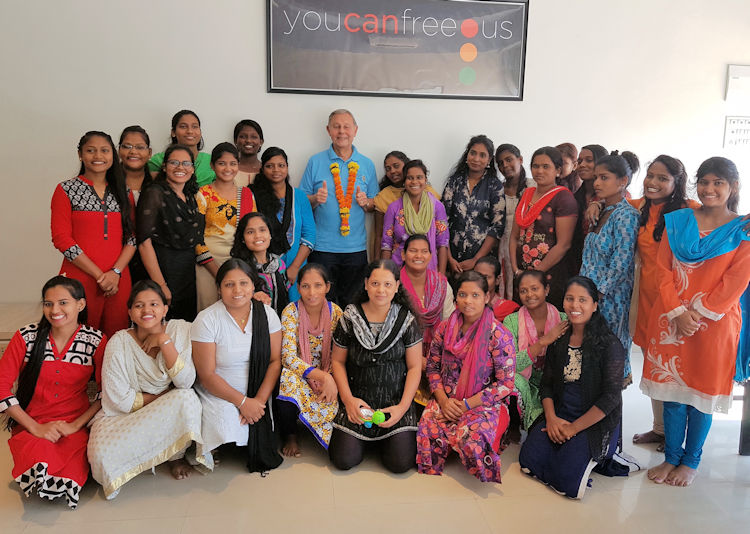 Mark Little is on a 20-year quest to battle slavery in India, Nepal, Thailand and Norfolk, which led to him being awarded an MBE by the Queen earlier this year.

It’s an unusual person who watches a TV programme about injustice, and then does something about it. In 2001 Mark Little, a founder member of the Norwich St Edmund Rotary Club, was bowled over by a Channel 4 documentary about modern slavery worldwide, particularly in India.

He wrote to 80 Rotary clubs in Delhi seeking more information about the rehabilitation centres for rescued slaves featured on the documentary. Two replied, and four months after the programme had been aired Mark was on a plane to Delhi to see for himself. The visit began for him a 20-year campaign against modern slavery.

Mumbai is the Indian city in which Mark was born. His father was a doctor who ran a mental hospital. “The English lived fairly royally,” he remembers, “and life was idyllic. We had a huge garden where I pretended to be Tarzan.” Life was organised by the servants, so there was no opportunity for the child to notice any slavery in India. He was sent to a boarding school in the hills of Tamil Nadu which was equally fantastic.

In 1947, India won its independence and everything changed. The English were no longer welcome. The family caught a ship to Liverpool, where they stayed with his father’s sister. Mark’s mother had a strong faith and put him through the Catholic school system in Liverpool and then Birkenhead. When he emerged, he joined the audit department of the civil service.

His career in audit and accountancy eventually led him to Norfolk, where he became Assistant County Treasurer for Norfolk County Council. He helped to found a new branch of Rotary, which initially met at the Caister Country Club just south of the city.

Rotary gave Mark the context in which to put into action a generous nature and a wide skill set. He cooked Indian curries and raised money for a project to inoculate children against polio. He hired the Norwich Playhouse and brought over a dancer from India to do a fundraising show to raise money to rebuild a village in South India which had been destroyed by the great tsunami of 2004. He took a course in bricklaying at Norwich City College and went out to India several times to build facilities such as toilet blocks, reservoirs, orphanages and many other amenities in Hindu and Muslim villages.

It was after watching the Channel 4 documentary, however, that he found his real cause. The quest to battle slavery led him beyond India, to Nepal and Thailand. He took his grandson, who was training to be a solicitor, and a small Rotarian group, to visit various trafficking shelters in the Kathmandu region and began to think more deeply about the reasons for the persistence of slavery.

“Corruption makes a culture more vulnerable to slavery,” he said. “When police and state officials are not paid much, they end up supplementing their income from the slave owners. When a raid is about to take place, the police tip off the slave owners, and the children are spirited away.”

The politics of south Asia also makes it difficult to respond. India is making it difficult for foreign organisations sending money to charities based in India, and Nepal appears to tax  money received into the country from bank transfers, which has made Mark revert to cash for his charitable gifts to that country. Decades of experience as an auditor have stood him in good stead as he reviews the accounts of the organisations which receive cash gifts from external donors.

Mark is equally concerned about the growth of modern slavery in the UK. “When the men cleaning the cars have no safety equipment, when a holiday let is visited by a series of men, we need to become suspicious,” he said. “Slavery can only be eliminated if more and people know that it exists.”

True to his convictions, Mark organised a session at the Maid’s Head Hotel for hoteliers and people working in hospitality to help them spot victims of modern slavery. It does not stop at the edge of the city, however. “Behind the hedges of lovely rural Norfolk, vegetable and fruit pickers are working as slaves,” said Mark. “The police even discovered a cannabis factory run by slave owners.”

So what can people do? “Educate yourself and help others become aware,” suggests Mark. “Give to organisations like Hope for Justice and the International Justice Mission which are fighting against slavery. Get companies to check their supply chains. Campaign for anti-slavery laws to be strengthened, and for procurement regulations to be extended from businesses to include local and central government.”

And, one could finally add, catch some of that go-getter, proactive approach which led to the Queen awarding Mark a well-earned MBE in this year’s honours list for his campaign against modern slavery.

Pictured above is Mark Little with survivors of sex slavery at their training centre in Mumbai.