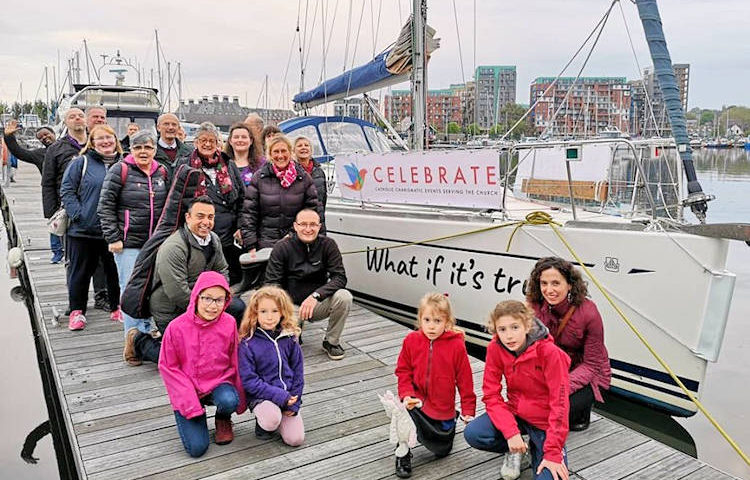 Latest news from across the Diocese of East Anglia includes a Celebrate sailing mission, pastors on the streets of Norwich and a celebration of the Feast of Divine Mercy.

A sailing yacht was welcomed into the port of Ipswich on Wednesday evening (May 8) with prayer, praise and worship by Catholics from across East Anglia reports Anne Murrin.

The boat What If It’s True is on a mission around the British coast to publicise the various Celebrate Catholic Renewal family conferences taking place at various locations, including at Bury St Edmunds on June 1 and 2.

The Ignite Youth Team and the St George’s Norwich Tuesday Prayer Group were among around 30 people to gather at Nelson’s Quay to pray and sing.

They met Russ Fairman from the Portsmouth Diocese, skipper and owner of the boat, who had sailed from Southampton picking up volunteer crew along the way.  Ross is on a mission to visit various ports around Britain close to where the Celebrate Conferences are being held.  The intention of his visit to Ipswich was to offer prayer support for the East Angl Celebrate Conference to be held at St Benedict’s School in Bury. Prayers were also said for the town of Ipswich and its surrounding locality.

The work of the Christian Norfolk Street Partnership was the subject of a talk organised by the Norwich Justice and Peace Group at the Cathedral Narthex in Norwich on April 4, reports Sarah Ebelewicz.

A 45-strong audience from several parishes heard John Pinnington and Irene Moore from NSP speak about the small ecumenical Christian charity which aims to offer practical support and help to young clubbers on the late-night streets of Norwich. They also watch out for rough sleepers and exist to express their Christian faith by means of offering care, compassion, appropriate practical and spiritual help to anyone in need.

John and Irene gave us a very vivid insight into the development of the charity, its core aims and values and many practical insights about a night shift on the street with the team and at the prayer base.

The presentation revealed the way in which officials and volunteers together have successfully developed a culture that effectively cares for mainly young people who, for whatever reason, are vulnerable on the streets of Norwich at night. At a time when bad news and frustrations abound in this country it is something for the city to be justly proud of, and does many people a lot of credit,

For a largely Christian audience it was inspiring to learn about prayer as the main bastion in supporting the work of the city pastors. This was a powerful example of prayer in action – and was a wonderful example to us all.

Both John and Irene were delightfully open in the way they explained what happens, and responded to questions from an engrossed audience. Judging from all the comments being expressed in the hall afterwards, this was both an education and a source of inspiration for many of those who attended.

The charity needs more volunteers to be part of the street/prayer team. Anyone who’s over 18, a regular worshipper at a Christian church for the last 12 months is welcome to apply. Applicants need to be prepared to complete NSP training, have a positive reference from their church and have a completed, accepted DBS check. Contact them on www.nspuk.org. 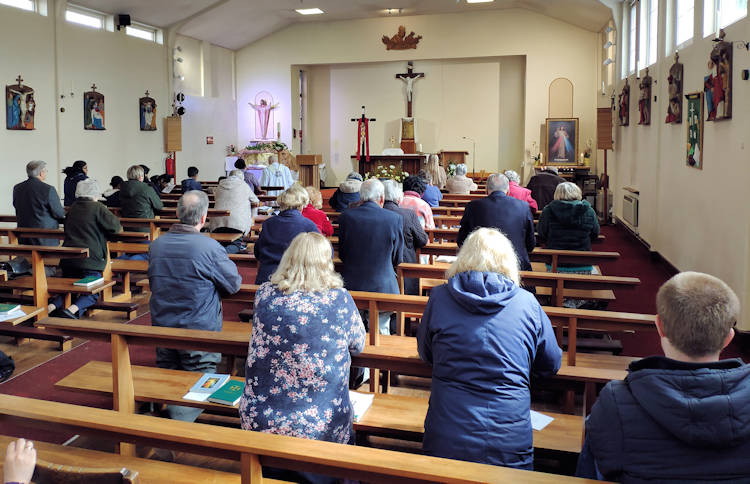 English and Polish parishioners of St James the Less Catholic Church, Ipswich, together with parishioners from the Ipswich Deanery, celebrated the Feast of Divine Mercy on Sunday April 28, led by Canon Michael Hazell and assisted by Fr Pawel Nawloka. The devotions began at 2pm with Exposition of the Blessed Sacrament and Confession. At 2pm, all present joined Catholics praying throughout the UK, reciting the Three O’clock Prayers and the Chaplet of Divine Mercy. Veneration of the Image of Divine Mercy was followed by Benediction.