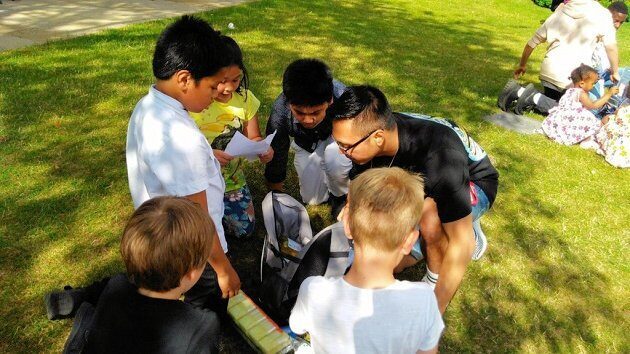 The youth group at St John's Cathedral in Norwich has started packing rucksacks for asylum seekers arriving into the city.

Responding to the refugee crisis, they began collecting basic goods and toiletries from parishioners and Notre Dame School.

The group compiled a list of items from feedback received from asylum seekers, meaning everything the youth group collected was useful.

With the large number of rucksacks to pack, one of the race organisers, Carol Chiltern made it into a game to make the process fun. The children had to find all 20 items for the rucksack by doing a competitive scavenger hunt outside.

Packing bags was especially poignant for some members of the youth group as Jo Graham, lead catechist at St John's said: "For some, collecting goods for people in need is all academic. But within the parish we have a growing number of refugees and asylum seekers.

"For them, it's a lived experience and they make it very real. The bags stop being packed for some nameless individual."

Catholic aid agency CAFOD has been encouraging people to respond to the refugee crisis with respect and love through writing messages of hope to refugees.

Parishioners were invited to place a sticker on a map to show their country of origin, before writing messaged expressing their solidarity with refugees.

254 messages were collected from the parishioners who came from over 50 countries around the world: from Mexico to Iceland to the Philippines. They are now distributed by CAFOD to refugees at home and abroad.

Young parishioner Beatrix wrote a message saying: "I think that you are being very brave and I hope you feel welcome in our country. I want you to feel that you are now somewhere safe. I will always be praying for you and thinking about you".

CAFOD representative, Stephen Matthews, said: "It's wonderful to see young people taking the lead and helping others to see. As Pope Francis said that "migrants and refugees are brothers and sisters to be welcomed, respected and loved." Keep up the good work."

The packed rucksacks will now be stored with volunteers before being given to asylum seekers when they arrive in Norwich.

Read more of this story on EDP24