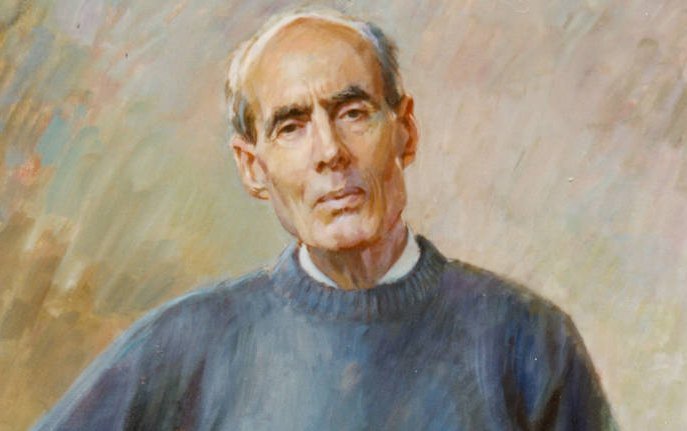 Image reproduced by the kind permission of the artist Jane Mendoza

A Memorial Requiem Mass to celebrate the life of Suffolk humanitarian and philanthropist Leonard Cheshire is to be held on September 7, the centenary of his birth, in his home village of Cavendish.

It will also mark the start of a campaign by the Diocese of East Anglia to promote his Cause, the first step to sainthood.

Leonard is best known for his work creating hundreds of homes around the world to care for disabled people, but he was also an outstanding war-time leader and pilot who was awarded the VC. He converted to Catholicism at the age of 31.

Fr James Fyfe, who will be promoting the Cause of Leonard, explained: "It means to begin to try to collect any evidence for sainthood from among the faithful. There is a prayer which invites people to pray to Leonard for a particular reason. If the prayers are answered then evidence is collected, examined and presented. This does not mean that we already think he is a saint – that part is a very long way off and it may be 50 or 100 years hence – it is a discovery process.

"Bishop Alan and the Diocese are embarking on the process because Leonard lived in Cavendish. But he is a world-wide figure and many people will be praying for the success of the Cause and we shall reach out to them. However, we shall begin in East Anglia first because there are people here who knew him and remember him and who may have something to tell us."

The Requiem Mass will be held in the Parish Church of St Mary the Virgin, Cavendish, Suffolk, CO10 8BA, at 7pm on Thursday September 7, celebrated by Bishop Alan.

Anyone interested in the promotion is invited to contact: Fr James Fyfe, 69 Queen's Road, Wisbech, PE13 2PH for more information.

A life of service and inspiration

Leonard Cheshire was born on 7 September 1917, the son of an Oxford Professor of Law. He was educated at the Dragon School in Oxford, at Stowe School, and at Merton College Oxford where he took a degree in law.

He was commissioned in the reserve of the RAF on joining Oxford University Air Squadron in 1936. He took a regular commission in 1939 and during World War II served almost without interruption in Bomber Command, including taking command of 617 Squadron "the Dambusters".

Leonard's record of 100 operational bombing missions was unequalled. He was awarded the Distinguished Service Order in 1940 (with two bars in 1943 and 1944), the Distinguished Flying Cross in 1941, and the Victoria Cross in 1944. He was selected by Winston Churchill as the British observer at the dropping of the atom bomb on Nagasaki in August 1945.

He left the RAF after the war and attempted to set up a community life for ex servicemen and women, first at Gumley Hall in Leicestershire and then at Le Court in Hampshire, but the scheme failed. In 1948 ' still at Le Court ' he agreed to look after one of the former members of the community who was dying of cancer and had nowhere else to go: it was contact with this man, Arthur Dykes, which initiated Leonard's conversion to the Roman Catholic faith

As Arthur neared death, Leonard was told that a priest ought to be called. He was deeply moved by the simplicity and prayerfulness of the administration of the Sacraments and of the prayers for the dying.

This experience of the Catholic Church in action inspired Leonard; and finding in Her the Truth, Authority and Unity he sought, he was received into the Church on Christmas Eve 1948 and lived his life with Jesus as his focus.

Leonard found others coming to him for help, and so started what was to become the world-wide charity Leonard Cheshire Disability with 80 homes in the UK and over 250 worldwide. His award of the Order of Merit was announced in February 1981 and his elevation to the peerage in June 1991.

In 1957, Leonard contracted TB and was hospitalized for two years. Enforced idleness, however increased his intense spirituality through hours of silent prayer.

In 1959 Leonard married Sue Ryder whose own international charity, the Sue Ryder Foundation, was already well established helping those in need of relief from persecution and illness. Together, they also established the Ryder-Cheshire Foundation to take on projects for which there was a clear need but which lay outside the scope of their separate foundations. They had two children ' a son Jeromy and daughter Elizabeth.

But Leonard developed Motor-Neurone Disease and, becoming increasingly immobile, retired from administration and devoted his time to developing his relationship with Christ.

Pictured above is a portrait of Leonard Cheshire by June Mendoza, used with permission. Photography by Kelvin Freeman.