The God who Speaks initiative is launched 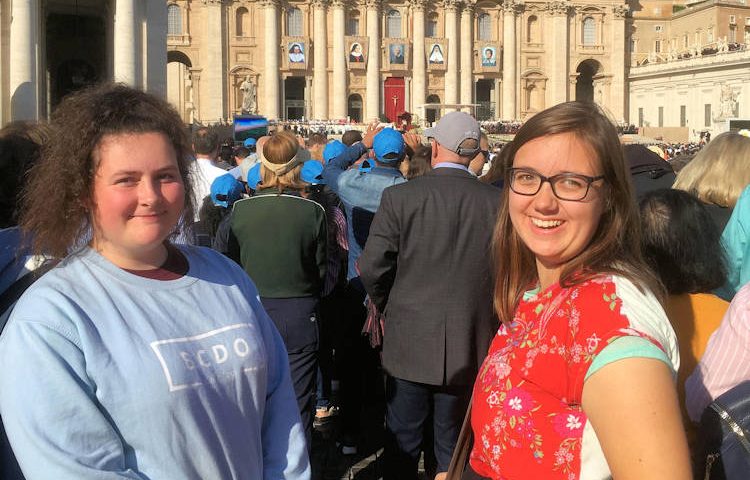 More stories about East Anglians in Rome for the Newman canonisation are emerging including a journey of thanksgiving, changing perceptions of St Peter’s Square and a minor miracle.

Fr Michael Rear and his wife went to the canonisation. He said: “We went in thanksgiving for Newman’s help in our journey to the Catholic Church, and for a particular answer to prayer.  It has been our privilege to walk in our small shoes in the big footsteps of this great saint, who has been responsible though his extensive writings and, as we know now, by his prayers, for bringing thousands of Anglicans like ourselves into what he called the ‘one fold of the Redeemer’.”

In his East Anglian group was Bishop Alan Hopes and a number of priests including Mgr Harkness, Mgr Armitage, Fathers Laurie Locke, Michael Johnstone, David Smith and Michael Stokes. In the vast crowd that filled St Peter’s Square for the outdoor Mass in warm sunshine they also spotted a number of other pilgrims from the diocese. All Posts

Fr Michael Rear said: “One highlight was to be standing in the long queue waiting to pass through security into the Square alongside Melissa Villalobos (whose miraculous recovery from a life-threatening condition was the second miracle for St John Henry’s canonisation), along with her husband David and their seven children, and being privileged to talk to them.

“St John Henry, by his life and teaching, shows us that from age to age God renews the Church by raising up men and women outstanding in holiness; and by declaring his sanctity the Church invites us to pray to him for the renewal of the Church today.”

Ignite Team member Emily Murphy was in Rome with former Ignite Team members Jess McCall and Catherine Williams (pictured above). She said: “I went to see St Peter’s Square on the first night I arrived in Rome. On the whole, I wasn’t impressed. The square felt empty; the Basilica seemed gaudy and over-the-top.

“Yet during the canonization Mass, the air shifted. The square was full of people, sounds of praise bouncing off the giant columns and rising up to God. The vastness of the Basilica highlighted the miracle of the Eucharist taking place at the hands of Pope Francis. It struck me that holy buildings, especially ornate ones like St Peter’s, are not meant to be admired as a museum. They’re meant to be worshiped in. Only when these spaces are full of human hearts raised in prayer can they be understood, appreciated, and alive.”

Fr Michael Johnstone says he experienced his own minor miracle while in Rome for the canonisation. On his final night he returned to his hotel to be told that his room was being given to someone else in a large group.

He was moved into a neighbouring house which turned out to be a hostel run by some elderly Nuns. He had a nice en-suite room, but knew that he did not have enough cash to pay for it, only having enough for the taxi fare back to the airport.

“I knew the sisters wouldn’t know about such things as credit cards, so I had a sleepless time wondering how I could get some cash before rushing off for the airport.  I offered a heartfelt prayer to the new Saint,” he said.

In the morning he met a priest outside the hostel chapel who spoke good English and had a devotion to Our Lady of Walsingham. Fr Michael mentioned his lack of ready cash:

“The priest had a group of about half-a-dozen people with him – and was about to celebrate Mass, so I joined him at the Altar.  After Mass, he said I was not to worry about paying the Sisters, as the group had had a ‘whip round’ and it had been done.  My own little miracle.”