Prayers for Kerala floods at St John’s Cathedral in Norwich 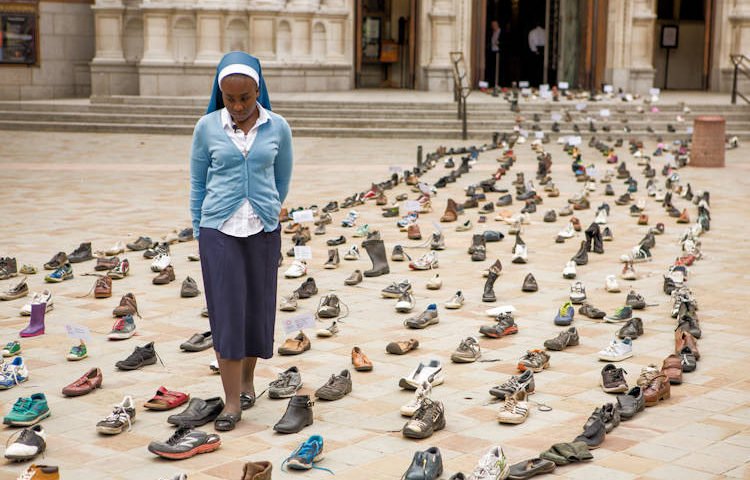 A man from Woodbridge who has walked as part of a global campaign to stand in solidarity with refugees has donated his shoes to a public installation curated by the international development charity CAFOD.

Myles Smith, from St Thomas of Canterbury Parish, got involved in the around the world challenge as part of the Share the Journey campaign.  Initially, the target was for CAFOD supporters to walk once around the world – 24,900 miles.

Since the launch of the campaign action earlier this year, more than 100,000 miles have been walked by people like Myles. 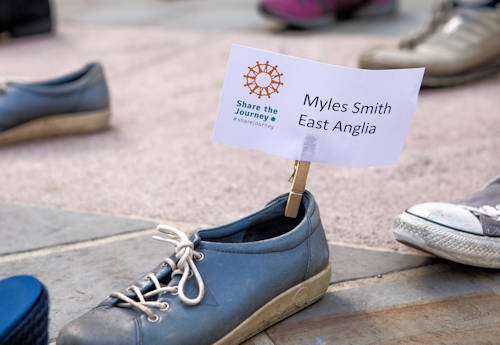 Myles’s shoes sat alongside 400 others sent in from people across England and Wales, refugees in Calais, MPs and international CAFOD staff, in a path leading to the Piazza of Westminster Cathedral signifying the importance of bridging the needs of compassion and dignity to refugees.

The Share the Journey campaign was launched by Pope Francis in September 2017 and is being championed by Catholic charities such as CAFOD. The campaign calls upon the Prime Minister to ensure the UK takes a prominent lead at a UN assembly in New York, where world leaders will reach two new agreements on protecting refugees and migrants.

CAFOD supporter Myles said: “The group naturally became spread out during the walk and we reflected at the time that this is what must happen to refugees as they travel from place to place. Fortunately, the prayer stops kept bringing us back together and everyone enjoyed the walk.”

CAFOD’s local representative in the diocese, Jane Crone, added: “People from across England and Wales have really united in support of the Share the Journey campaign.  To have Myles’s shoes sitting alongside so many others was extremely poignant and shows just how widespread the support of this campaign has been.

“Share the Journey will deliver a powerful message to world leaders that we want new global agreements that ensure refugees and migrants can live fairly and with dignity.”

Find out how you can join the campaign at cafod.org.uk/sharethejourney

Pictured above, Sister Clara – a CAFOD volunteer from Zambia – walks among 400 pairs of shoes from supporters, migrants and refugees from around the world outside Westminster Cathedral.