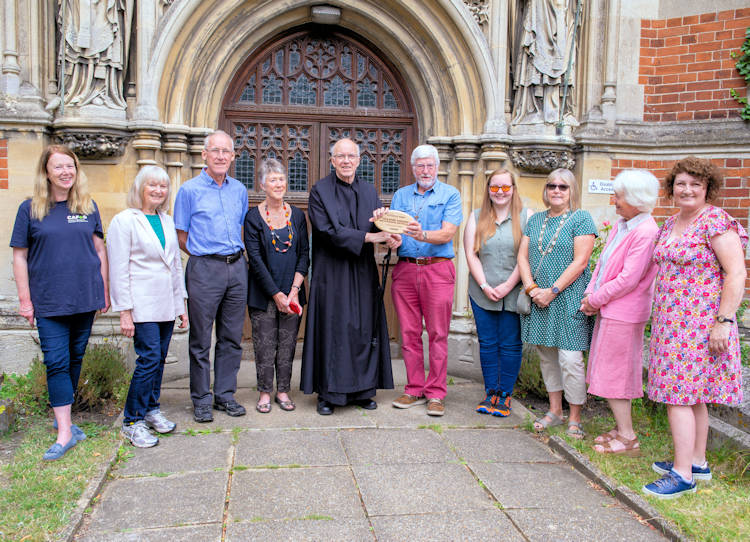 The Parish of Bungay has become the 100th recipient of the livesimply eco award for the commitment of a group of volunteers to living sustainably to protect the planet.

Fr Charles Fitzgerald-Lombard, the 80-year-old local parish priest at St Edmunds, has been one of the driving forces to get the community on board with livesimply.  Newly retired he’s proud of what the parish has been able to achieve.

“As the parish priest I have tried to encourage these ideas (on living more simply)  in some of my homilies and also introducing others to the idea of sustainable living.”

The parishioners from St Edmunds parish proudly received their livesimply award August 19, at the local parish hall in Bungay. They set up several projects including installing 20 photo-voltaic panels on the roof of the local parish and school hall, reducing paper by switching to online newsletters, using biodegradable plastic bags at fairs, sharing surplus food produce at Mass, swapping lightbulbs for LED lightbulbs, and serving Fair Trade teas after church services and at parish events.

The community effort made by parishioners to get their livesimply journey up and running took around four years to achieve.  Fr Charles explained that they have all been inspired by the radical and inspirational words of Pope Francis’s letter on the environment:

“It is six years since Pope Francis issued his encyclical Laudato Si, which encourages all of us to work to preserve the environment and try to live in solidarity with our brothers and sisters, in the global South, who are hit hardest by the effects of the climate crisis ‑ facing extreme weather events, such as hurricanes and droughts.”

Launched ten years ago by the UK aid agency CAFOD, the livesimply award is a rallying call for community groups, parishes, or schools, to walk or cycle, install solar panels, start recycling schemes, join a climate campaign, support Fairtrade – there are many possibilities for people to start their eco-initiatives. At the heart of the award, is the inspiration it gives others to take up an eco-friendly way of living- and 10 years later, the 100th award has been given to another committed parish.

“I hope that the parish will continue to embrace this concept and the practice of living more simply and treading more lightly on the earth,” said Fr Charles.

Mary Kirk, a St Edmunds Parishioner and CAFOD volunteer, who got involved in the livesimply initiative added:

“As a parish it’s important that we play our part in protecting the planet, and we will all be looking to the UK government to do their part at the COP26 climate conference at the end of this year, to ensure that issues such as policies to cut carbon emissions become a reality.

“If we as a parish can create lasting change, so our leadership must change priorities and put money into reducing carbon output, and not into armaments, road building, and increased air traffic potential.”

Mary says that the words of Pope Francis’s Laudato Si led her to make some big life choices.

“I suggested we take part in livesimply as a profound personal response to Laudato Si’ which grew within me as I walked on my pilgrimage to Rome,” said Mary.

“As a result, I installed PV panels on the roof of my home, sold my big car and bought a small, economical and low-emissions car. I gave up buying meat for a year, and now eat very little meat. I resolved only to eat what was in season and local – I also already grow most of my own vegetables.”

“I try to walk everywhere locally. I also changed to an electricity supplier which was fully green/renewables – and I started working for refugees in Calais.”

livesimply assessors Rob and Clare Hardie from North Walsham knows what it takes to receive a livesimply award, as their parish was presented with the award in 2018.

Sharing why Bungay’s livesimply initiative was successful, they said: “The parishioners in Bungay have demonstrated a complete understanding of the Pope’s message in Laudato Si and have taken on board living simply, sustainably and in solidarity with vulnerable communities.

“We were particularly impressed with the amazing stalls they have been running at Fressingfield and in Bungay which raise the profile of both CAFOD and the Parish – and have of course raised a lot of money to help alleviate poverty worldwide and provide support for emergency appeals.”

Jane Crone, CAFOD’s representative for East Anglia, attended the ceremony and said: “We are delighted to see St Edmunds receive this award, after four years of hard work, they have made their plans a reality, and have started the important journey of living more sustainably in their parish.“CAFOD volunteer Mary Kirk inspired the parishioners in Bungay to take part in the livesimply project, and her walk to Rome in 2016 was the start of an exciting journey of ecological conversion for the people of this parish.

“I’ve been inspired by the creative ways in which they’ve responded to ‘the cry of the earth and the cry of the poor’ through prayer, campaigning actions and the generous giving of their time, talents and resources.”

Find out more about the livesimply award at cafod.org.uk/livesimply