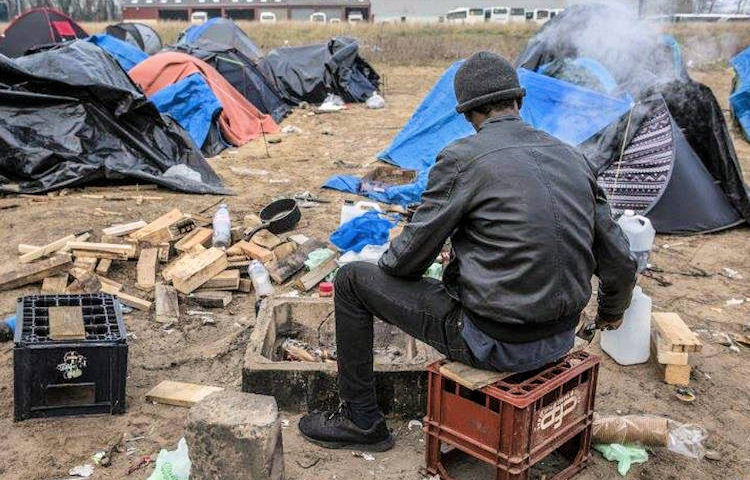 A hugely generous response from St Edmunds Bungay and Harleston to the Pope’s “moral imperative” to assist the exiled, the migrant, and the refugee, enabled parishioner Mary Kirk to take a car full of material donations and more than €1000 for the work of Help Refugees at the Auberge des Migrants in Calais.

A second collection raised nearly £500 and others chipped in. For the second year running parishioners also bought or donated goods desperately needed for those stranded in Calais and along the coast to Dunkirk.

Mary said: “The situation for the “exilés” (so designated as to avoid any judgment as to who is a refugee and who is a migrant) is piteous, especially in the bitterly cold weather at the end of January and early February when I was there.

“Official policy is to prevent the creation of any camp such as the Jungle, which was demolished in 2016, so the Frontier Police and Riot (CRS) Police squads daily (and nightly) destroy and remove all tents, sleeping bags, and belongings, and move the exilés on. There is a great reluctance to go to registration centres as it could result in their being immediately deported back to their first point of entry into Europe.”

Help Refugees at the Auberge des Migrants distributes more than 1500 hot meals a day in Calais and along the coast via the Refugee Community Kitchen. There is a regular distribution of tents, sleeping bags, blankets, clothes and toiletries. And, vitally in winter, two tons of wood, in 13kg bags, are taken out each day, just to keep people alive in sub-zero temperatures. Because of the regular evictions and clearances, donations are needed urgently all the time.

To read about the work of the Auberge des Migrants, which is run on volunteer labour, with many young people often giving up months or years to help, go to:

Pictured above is a refugee camp near Calais. Picture courtesy of Auberge des Migrants/Refugee Info Bus.