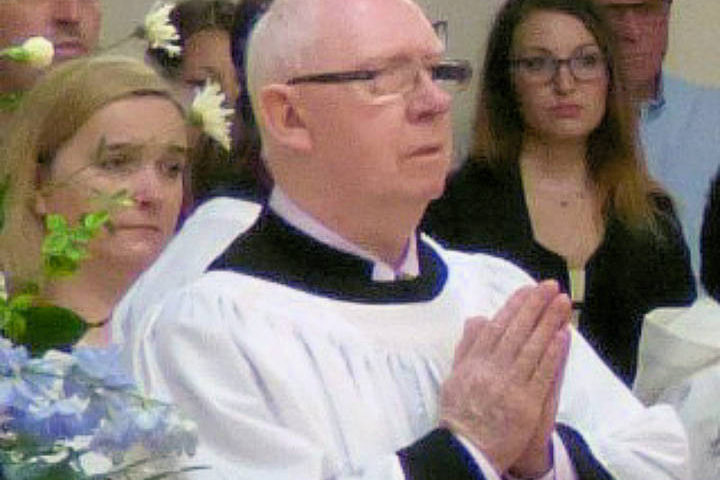 St Peter the Apostle in Gorleston was crowded on Wednesday February 6 for the funeral of long-serving and much-loved Sacristan, Bernard Power.

Two of St Peter’s former parish priests had returned for the ceremony: Fr Henry MacCarthy, now retired, had worked with Bernard for many years, and came to deliver the homily, full of reminiscences of Bernard’s cars and his work with the Hospital Car Service, and his work with Alcoholics Anonymous, as well as reminders of Bernard’s awful puns.

Fr Philip Shryane, who had only recently moved from Gorleston to Huntingdon, presided at the Requiem Mass. Also present were the three priests of the parish, Fr Anthony, Fr Alex and Fr Alvan and Deacon Peter Glanville.

Owen Darby, one of Bernard’s team of servers, delivered a tribute to Bernard’s attention to detail and insistence on getting everything right, and like Fr Henry, mentioned Bernard’s  jokes and sense of humour. He also spoke of Bernard’s family and his younger days, which few of us knew about.

The hymns and responses were sung with great gusto, and at the end of Mass, Bernard was taken to the Magdalen Cemetery for burial. His friends and family then went to the Parish Hall for refreshments and to share their many loving memories of their old friend.