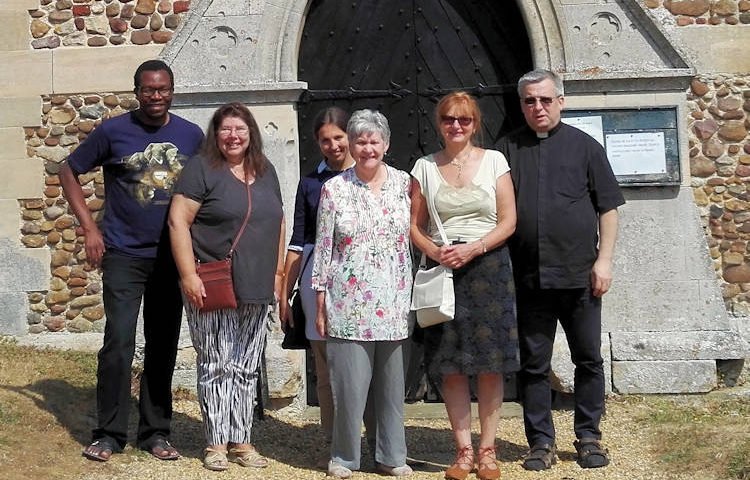 The Proclaim group from the St Ives parish have been following in a 120-year-old tradition of evangelisation, led by Fr Karol Porczak, in visiting homes in the parish with the Gospel message. Elizabeth Barker reports.

It was back in 1902 when the first parish priest, Canon Dr John Arendzen from Cambridge, travelled to St Ives by pony and trap each weekend to celebrate Mass in a church rededicated to the Sacred Heart

In St Ives, the Catholic population was growing due to the number of drovers from Lancashire and Ireland who frequented the cattle markets and, being Catholic, wanted Mass. The congregation soon outgrew its first small wooden building and a large plot of land was purchased through the generosity of George Pauling.

Being a civil engineer, George was aware that the disused church of St Andrew in Union Road Cambridge would be a more economical option for a permanent church building. His donation of £1000 paid for the dismantling, and transportation by barge and rebuilding on the present site in Needingworth Rd.

Canon John was a scholar and writer and also a most enthusiastic missionary, preaching in the highways and byways. He was invited to become one of the founder members of the Catholic Missionary Society by Cardinal Vaughn in 1910.

Three years ago, Canon Arendzen’ vision was renewed by Fr Karol Porczak, a missionary priest from the Congregation of the Missionaries of Our Lady of La Salette (MS) from Poland.

He is the Episcopal Vicar for Evangelization and similarly fired with the same missionary zeal. Fr Karol has introduced a prayer to be said for all in St Ives and the 26 villages of the parish on the same date each month.

The Proclaim group carried out its first door-to-door evangelization in the smallest village – Knapwell – on Saturday morning, July 21. Five parishioners, along with Fr Karol, went out in twos to knock on doors and offer a card with a picture of Jesus and a Gospel message, after a blessing in church.

Meanwhile the evangelisers were supported by the prayers of a group of parishioners who spent an hour in Adoration of the Blessed Sacrament at Sacred Heart church.

More visits are being planned with a greater number of evangelisers who hopefully will have the same positive experience as the initial group.

Elizabeth Barker is RE Coordinator in Sacred Heart, St Ives.

Pictured above is the St Ives Proclaim group in Knapwell, from the left: Jeffrey, Jackie, Agata, Elizabeth, Wilhelmina and Fr Karol.